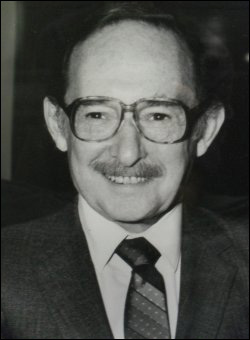 Early on, David Ross gained some notoriety as a bantamweight boxer in the East Bronx. His political style was rooted there and served him well later on. He was known as a “nonstop talker and pacer, and a backslapper who was used to wheeling and dealing.”

David Ross was born in Zeradov, Poland, on November 28, 1920, and emigrated with his family to the United States at the age of 3, settling in the Bronx. He attended public schools there, working in the family bakery and on a delivery truck after school. He graduated from St. John’s University and from its Law School in 1942. That same year he was admitted to the Bar and inducted into the Army, where he served in the Pacific as an officer in the Army Intelligence Corps. Upon his return from service, he went into private practice.

Ross was elected to the New York State Assembly from Bronx County in 1950 and was elected to the New York City Council three years later. He remained there for 15 years, 5 of which were spent as the majority leader (1963-1968). One City Hall observer told the New York Times in 1966 that “the attributes which set some people’s teeth on edge — his brusqueness and crudeness and even rudeness — make Ross almost the perfect leader for the Council and help give it a sense of organization.”

Justice Ross was elected to the Supreme Court bench in 1969. From 1971 to 1974, he served as administrator of New York City’s Criminal Court, achieving a 63 percent cut in backlog of cases after only one year and earning the praises of Mayor John Lindsay. The cut in backlog was achieved through a number of reforms as well as the introduction of Night and Weekend Courts in the Bronx. In 1974, Chief Judge Charles D. Breitel of the Court of Appeals appointed Justice Ross as citywide court administrator, having jurisdiction over the criminal and civil branches of State Supreme Court in both the First and Second Departments, the Surrogate’s Court, and the Civil, Criminal and Family Courts of the City Court system.

In 1979, Governor Hugh Carey appointed Justice Ross to the Appellate Division, First Department, where he served until his retirement in 1997.

Justice Ross was married to Miriam Goodman Ross in 1942. They had two children. In his later years, he and his wife escaped to their cottage on White Meadow Lake in Rockaway, New Jersey, where he maintained a collection of Staffordshire historical plates and tended an impressive garden. He died on August 25, 1997, at age 76.