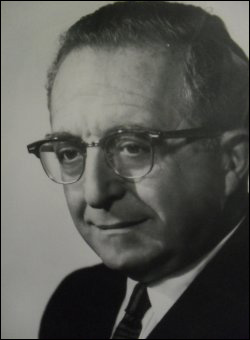 As a Supreme Court Justice, Martin M. Frank condemned the “standard magistrates’ courts practice” of arraigning persons on “an assembly line basis.” He made the statement after releasing two men who had spent four months each on Rikers Island. The men had been arrested, along with 22 others, and sentenced to six months each on charges of disorderly conduct. One was arrested for loitering, and the other was charged with drinking wine from a bottle in a hallway. Justice Frank said “The hurried arraignment of human beings by the dozen, and, because they stand mute, to assume that they plead guilty, is contrary to our concepts of individual rights and contrary to law.”

Martin M. Frank was born in Gloversville, New York on October 7, 1900. After his father and three sisters died in a fire, he and his mother and brother moved to New York in 1909. He graduated from City College and, in 1923, received his law degree from New York University Law School. Bar admission followed the next year, at which time Frank went into private practice until 1926, then becoming law secretary to Judge Albert Cohn, a County Judge at the time. After four years, he was named an assistant district attorney in the Bronx, where he served for 16 years. During his tenure he interrogated Bruno Richard Hauptmann, kidnaper of the Lindbergh baby, when Hauptmann was arrested in the Bronx.

Frank was elected justice of the Municipal Court in the Bronx in 1946 by Mayor William O’Dwyer, and sat for six years, at which time he was elected to the Supreme Court 1st Judicial Department. While sitting on the Supreme Court bench, in 1953 Justice Frank awarded a private detective $22,000 for injuries suffered while helping a police officer to restore the peace. The law of “hue and cry,” which predated the Saxon invasion of England in the fifth century, was the basis for that award. That law “imposed upon lord and liege the duty to maintain public peace and safety and to apprehend the violators hereof.” In 1955 Justice Frank held that a Bronx swimming pool and recreation center could not lawfully refuse to admit African-Americans. The group had contended it was a private membership organization.

In 1956 Governor Averell Harriman designated Justice Frank to the Appellate Division First Department, where he remained until his untimely death in 1960.

He is the author of the book Diary of a D.A., his recollection of the 16 years he spent as an assistant district attorney in Bronx County.

Justice Frank was married to Ann Freudenfall Frank. They had no children. He died of a heart attack on May 19, 1960 at age 59 while on vacation on Cape Cod.