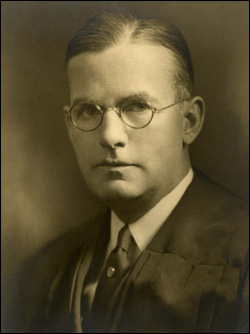 In 1940, Judge Lewis was appointed to the Court of Appeals. See his full biography HERE.

Edmund H. Lewis was born on August 30, 1884. He received a Bachelor’s Degree from Yale University in 1907 and a law degree from Syracuse University Law School in 1909. He was admitted to the bar the same year.
He spent the next six years in private practice.

In 1915 Lewis was appointed Deputy State Attorney-General, a post he held until his entrance into the army in 1918. There he was a functionary in the Judge Advocate-General’s Office with the rank of Major. Discharged, he was elected Corporation Counsel of Syracuse (as a Republican) holding office for two years (1920-22), after which he returned to private practice for eight years. In 1929, he was elected a Justice of the Supreme Court for the Fifth District. From 1930 to Oct. 30, 1933 he presided as a trial judge. On the latter date he was elevated to the Appellate Division for the Fourth Department, on which court he remained until his appointment to the Court of Appeals on January 3rd, 1940. Returned by elections the following November, he remained as an Associate Judge thereof until his appointment as Chief Judge on April 22, 1953. Again returned by election in the Fall, he continued to preside until his mandatory retirement at the close of 1954. Lewis returned to private practice following his departure from the bench, and also served a term as president of the State Bar Association (1955-56). He died in Syracuse on July 30th, 1972.