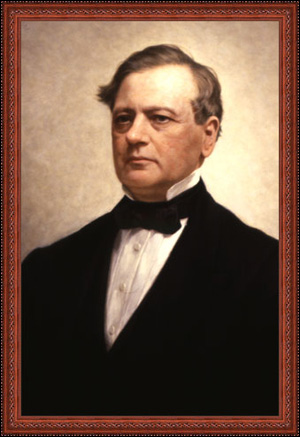 By 1864, Judge William F. Allen had earned his peers’ respect in the form of the Democratic Party’s nomination for Governor of New York. Prototypical New York pundit Thurlow Weed described the esteem in which Judge Allen was held, stating that in him “I found a capable and enlightened man … I have known him first as an able and useful member of our Legislature, and next as an eminently upright judge.” Preferring the congenial confines of the judiciary, however, Judge Allen declined the nomination and went on to serve as an Associate Judge of the Court of Appeals from 1870-1878.

William Fitch Allen was born in Windham County, Connecticut on July 28, 1808, the oldest son of Abner Harry Allen and Cynthia Palmer. The Allen family moved to Schenectady County in 1814. Interestingly, Cynthia Palmer’s sister was the mother of Court of Appeals Chief Judge Sanford Church (1815-1880), making Allen and Church not only colleagues on the state’s highest court, but cousins as well.

After graduating from Union College in 1826, Allen associated with several esteemed jurists. He pursued the study of law with Judge John C. Wright, who later served on the Court of Common Pleas. After completing his legal studies, Allen was admitted to the bar in 1829. He soon commenced the practice of law in Oswego County in a partnership with George Fisher, who served briefly in the Twenty-third United States Congress. Mature beyond his age, Allen’s physical appearance and demeanor reflected his gravitas. Commentator Irving Browne explained:

In person he was rather tall and moderately stout; somewhat swarthy; his frame was formed for endurance; his well-rounded head indicated resolution ‘and firmness, and was well balanced between the reflective and the executive faculties. His capacity and patience of labor were extraordinary. His manners were easy, dignified, and considerately courteous. His nature was warm and impulsive, but held under the restraints of reason and religion.

After several years of private practice, Allen entered the political arena as a State Assemblyman from Oswego in 1843 and 1844. He moved quickly through the ranks of public service. In 1845, President James Polk appointed him United States Attorney for the Northern District of New York C a position he held until 1847, when he was appointed judge of the Supreme Court in the 5th District. Judge Allen apparently served his term on the 5th District exceptionally well, as indicated in this passage regarding his reelection to the same position in 1855:

“At the expiration of his first term as justice of the Supreme Court of the Fifth Judicial District in 1855, both political parties presented [Judge Allen] as their choice for the same office for the succeeding term of eight years, and the legal profession of his district were unanimous in his favor, thus attesting in the highest manner possible the appreciation of his ability as a judge and his purity as a man.”

While on the bench at the 5th District, Judge Allen presided over an interesting case involving a canine attack. In Wiley v. Slater (22 Barb 506 [1856]), the trial court had awarded $50 in damages to the claimant for the death of his dog, which had been attacked and fatally injured by another dog. Despite being noted for his rigid application of the law and serious demeanor, Judge Allen demonstrated his sharp wit and dry sense of humor in reversing the judgment. Striking down the damages award, Judge Allen explained:

The branch of the law, therefore, applicable to direct conflicts and collisions between dog and dog is entirely new to me, and this case opens up to me an entire new field of investigation. I am constrained to admit total ignorance of the code duello among dogs, or what constitutes a just cause of offense and justifies a resort to the ultima ratio regem, a resort to arms, or rather to teeth, for redress; whether jealousy is a just cause of war, or what different degrees and kinds of insult or slight, or what violation of the rules of etiquette entitle the injured or offended beast to insist upon prompt and appropriate satisfaction, I know not, and am glad to know that no nice question upon the conduct of the conflict on the part of the principal actors arises in this case.

As a Supreme Court Justice, Judge Allen served as ex officio judge on the Court of Appeals in 1854 and 1862, but was defeated in an election to the Court in 1863. While he was still serving on the 5th District, some Democratic Party members wished to nominate him for Governor of New York in 1864. At the time, fellow Democrat Horatio Seymour was completing his second, non-consecutive, term as Governor. Seymour had provoked the ire of many in the state by declaring the Emancipation Proclamation unconstitutional. This may have played a role in his party’s desire to replace him with Judge Allen. Nevertheless, Seymour obviously retained a position of respect, if not power, in the party:

Horatio Seymour was then Governor, and Mr. Allen’s friends at least understood that Mr. Seymour wished a renomination as a compliment, but would decline. To their consternation, however, Mr. Seymour came before the convention, thanked its members for the honor done him, and accepted [the nomination].

Judge Allen chose to decline the gubernatorial nomination. Seymour eventually lost to Republican Reuben E. Fenton. (Seymour, however, did not allow this setback to thwart his political ambitions. He captured the Democratic nomination for President in 1868, but lost the general election to Ulysses S. Grant.)

After declining the nomination for the state’s highest office, Judge Allen moved to New York City to practice law in association with several prominent members of the bar, including Benjamin Vaughan Abbott, who specialized in compiling law digests. Judge Allen also practiced with Elbridge T. Gerry, the grandson of Elbridge Gerry, a signer of the Declaration of Independence, the fifth vice-president of the United States, and the man responsible for the term “gerrymander.” Despite a successful experience in the private arena, Judge Allen felt compelled to enter public service once again. In 1867, he was elected State Comptroller, defeating Horace Greeley, the influential and controversial editor of the New York Tribune.

New York in the 1860s was dominated by the powerful political machine of Tammany Hall and its corrupt ringleader, William Marcy “Boss” Tweed. Judge Allen, however, appears to have remained above the seedy politics of the time. Indeed, he oversaw a marked reduction in the state debt, and his annual reports to the Legislature focused on the excessive costs of maintaining the state’s canals and prisons. Judge Allen’s honesty paid off as he was reelected Comptroller in 1869. His second administration in the office, however, proved short-lived.

In 1870, Judge Allen resigned as Comptroller after he was elected to the Court of Appeals in the first election to that office after a constitutional amendment substantially changed the Court’s organization. Allen brought his well-honed legal skills to the state’s highest court, as described by commentator Irving Browne:

He is said to have had great power in the consultation-room. One of his brethren once said to me, ‘We may sometimes doubt that he is right, but it is almost impossible to refute him, and he frequently carries his point by sheer intellectual force and skill in argument.

The astuteness and resolve Allen showed so early in his legal career would prove useful as he issued a rather unpopular opinion in People ex rel. Tweed v. Liscomb (60 NY 559 [1875]). “Boss” Tweed was charged with an indictment consisting of 220 counts. The trial court found him guilty of 204 counts and sentenced him on 12 counts to successive terms of one year each. After serving one year in prison, Tweed won habeas corpus relief, challenging the legality of his continued imprisonment. Writing for a unanimous Court (with Judge Rapallo writing separately), Judge Allen declared that the common law only permitted one count and sentence for one indictment and that the later cumulative sentences were void. Although there was no dissent by any member of the Court, the decision was condemned in England and criticized in certain quarters. Tweed died in debtor’s prison in 1878.

Judge Allen served on the Court until his death, on June 3, 1878. His funeral service took place at his home in Oswego. He is buried at Riverside Cemetery in Scriba Township, Oswego County. Commenting on Judge Allen’s service to the state and his exceptional personal character, Chief Judge Sanford E. Church remarked:

[Judge Allen’s] personal character was of the highest order. He took no step outside the path of a wise sobriety and exemplary rectitude. His judgments and his life were in accord. He was simple and modest. He was kind in nature, affable in intercourse, of warm social impulses, sensible of the claims of his fellows, and prompt in rendering all the dues of neighborhood.

Judge Allen served as a trustee of Union College. After his death, the school established an essay prize in his name. The prize is still awarded annually at the school.

Beyond his judicial decisions, Judge Allen apparently did not publish any books or articles.