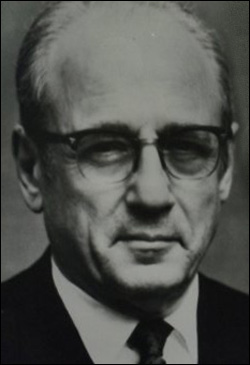 In 1976, Justice Arthur Markewich was the justice presiding on the panel of Appellate Division judges that disbarred Richard M. Nixon in New York State after Mr. Nixon’s resignation as President in 1974 after the Watergate scandal. Markewich was a main drafter of the unsigned decision in which the panel affirmed that the essential part of Mr. Nixon’s misconduct was his “obstruction of the due administration of justice, a most serious offense, but one which is rendered even more grievous by the fact that in this instance the perpetrator is an attorney and was at the time of the conduct in question the holder of the highest public office of this country and in a position of public trust.”

In 1947, New York City Mayor William O’Dwyer appointed Markewich City Magistrate for a ten-year term. However, three years later, Justice Markewich was elected City Court Justice. After four years on that bench, he was elected to the Supreme Court, 1st Judicial District, in 1954.
Governor Rockefeller, in 1969, appointed Markewich to the Appellate Division First Department, where he remained until 1982.

Throughout his life, Justice Markewich remained active in fraternal and philanthropic organizations. In the mid-1950s, he was elected President of B’nai Zion, an American fraternal Zionist organization. He was initiated into the Free & Accepted Masons of the Grand Lodge of the State of New York in 1929 and eventually became the Grand Master of Masons in the State of New York in 1974.

Markewich was married in 1930 to May Elish Markewich, with whom he had two sons. Justice Markewich died on February 24, 1993 at age 86.