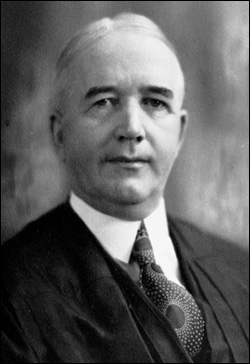 Justice Heffernan also sat on the bench of the 1st Department; more information can be found HERE.

Justice Christopher J. Heffernan was born in Athlone, Ireland, on May 5, 1883. His family emigrated to Amsterdam when he was nine years old. He graduated from St. Mary’s Institute and then studied law in the office of Florence J. Sullivan. He was admitted to the Bar in 1903. His career of public service began with his appointment, in 1906, as Corporation Counsel for the City of Amsterdam. In 1925, he was elected to the Supreme Court, and re-elected in 1939. In 1926, acting as a special commissioner for Gov. Smith, he recommended the dismissal of several officials of Saratoga Springs charged with neglect of duty by permitting “wide open” gambling. The Governor followed the advice and dismissed the District Attorney and the County Sheriff. For almost twenty years, March 1933 to December 1952 (when he had to retire because he had reached the age of 70), he served on the Appellate Division. He also served for several months in 1951 on the Appellate Division, First Department. While on the appellate bench, he wrote the majority opinion in a 1939 case which declared a Republican budget plan an unconstitutional emasculation of Gov. Lehman’s budget. The Republicans in the Legislature had attempted to substitute a legislative bill for the executive budget. The ruling was upheld by the Court of Appeals. After leaving the Appellate Division, he served as an Official Referee until his death on January 12, 1959. He had five children, four daughters and one son. The son, a West Point graduate, was killed at the Battle of Bataan in World War II.