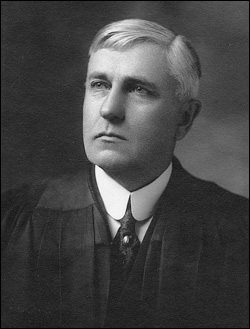 Presiding Justice Aaron V. S. (Van Schaick) Cochrane was born on a farm in Coxsackie, Greene County, on March 14, 1858. He received his preliminary education at Claverack College and at the Hudson River Institute in Claverack, Columbia County, and graduated from Yale University in 1879. He moved to Hudson in Columbia County in 1879 and began studying law in the offices of Andrews and Edwards. He was admitted to the Bar in September 1881 and began practicing law in Hudson; in 1890, he began a partnership with William Brownell. He served as Police Court justice in Hudson (1887 to 1888) and then as District Attorney of Columbia County (1889 to 1892). He served in Congress from 1897 to 1901, representing the 19th Congressional District, comprising the counties of Columbia and Rensselaer. He was elected to the Third Judicial District Supreme Court in 1901 and re-elected in 1915. He served a five-year term on the Appellate Division, Third Department (January 1906 to January 1911) and then returned to his Supreme Court post. In November 1915, he returned to the Appellate Division. He was appointed Presiding Justice by Gov. Miller in January 1922 and served as such until his resignation on January 18, 1928. He died on September 7, 1943, in his 86th year.