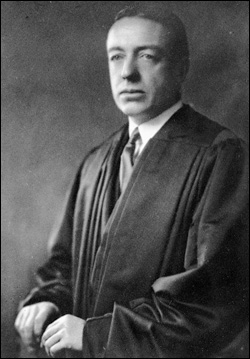 Justice Gilbert V. Schenck was a member of one of the oldest families in New York. Dating from the period of Dutch occupation, the name is found mentioned in the public activities of the colony and of the State over a very long span of years. He was born in Palatine, Montgomery County, December 28, 1882. After attending the common schools, he entered the Albany Boys’ Academy and Union College. He was graduated from Albany Law School in 1906, and his admission to the Bar followed immediately. He opened a law office in Albany. From 1902 to 1916, Justice Schenck served in the 10th Infantry, New York State National Guard. During World War I, he commanded the Third Anti-Aircraft Machine Gun Battalion with the rank of major, a rank he continued in the Officers’ Reserve Corps. He was appointed Corporation Counsel of the City of Albany at the beginning of 1922. His judicial career began as Albany County Surrogate. He became a Supreme Court justice in 1933. From 1939 to 1944 he served on the Appellate Division. In 1938, he was a delegate to the Constitutional Convention. He was President of the Albany Public Library Board of Trustees for many years and made particular contribution in that role. He died on March 24, 1946.