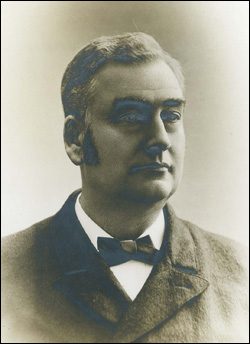 Edwin A. Nash was born in Bedford, Ontario, Canada on October 26th, 1836, the son of a cabinet maker from Troy, NY. Political tensions between the United States and Canada forced the family to flee to New York in 1839. They looked in Canandaigua, Reed’s Corners and West Bloomfield before settling in Lima in 1849. Nash attended local district schools, Genesee Wesleyan Seminary and Albany Law School. After studying law in the office of H. J. Wood of Lima, he was admitted to the bar in 1860. He practiced in partnership with Wood in Lima from 1860 to 1871, and alone there from 1871 to 1878. He moved to Avon in the latter year.

Nash was heavily involved in the Republican Party from 1860 onward, though he abstained from seeking any office outside of the domain of the Court. He was twice elected District Attorney for Livingston County holding office from 1869 to the close of 1874, and three times was elected Livingston County Judge and Surrogate, sitting from 1879 to the time of his election to the Supreme Court for the Seventh District in 1895. The bulk of his years on the Court were spent in trial work, his period on the Appellate Division for the Fourth Department having been limited to two years (1905 and 1906). Mandatorily retired at the close of this period, he returned to private practice, remaining so engaged until his death in Avon on July 24, 1911.