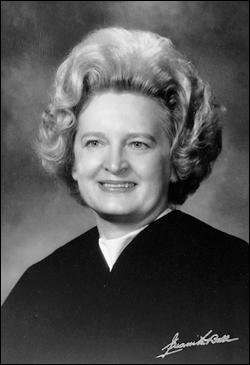 Justice Ann T. Mikoll is one of the first two women appointed to the Appellate Division in New York State. In a dual appointment on May 19, 1977, Justice Mikoll was appointed to the Third Department and Justice Dolores Denman was appointed to the Fourth Department. Justice Mikoll was appointed a Buffalo City Court Judge at age 27 in 1957 after two years as an Assistant City Corporation Counsel. She subsequently won election to the City Court and reelection in 1967. Her election to the Supreme Court in 1971 made her the first woman ever elected to that position outside of New York City; she was reelected in 1985. She obtained both her undergraduate (1951) and law (1954) degrees from the State University of New York at Buffalo. Justice Mikoll has the distinction of being the first woman to preside as the Justice Presiding of a Third Department panel. She was a member of the New York State Commission on Judicial Conduct for four years. She retired from the Third Department in 1999.