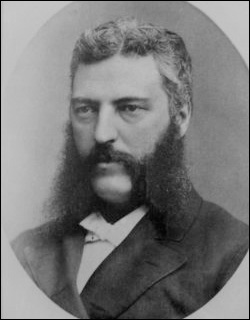 Justice Rumsey also sat on the bench of the 4th Department; more information can be found HERE.

Born October 18, 1841 in Bath, New York, William Rumsey was the son of Judge David Rumsey, a distinguished lawyer and jurist. He graduated from Williams College, even though he left in his senior year to enter the Army. In 1865 he was discharged from the Army, having attained the rank of Colonel. Rumsey began to study law in 1868 and was admitted to the Bar two years later.

In March of 1901, then-Governor Odell appointed Justice Rumsey to the Fourth Department for a five-year term after serving at the First Department for 5 years. Six months later, though, he resigned his seat on the Supreme Court bench to go into private practice with his son-in-law John S. Sheppard.

Justice Rumsey was appointed by Governor Hill as a member of the committee to revise the Code of Evidence for New York, which still to this day (July 2009) has not been codified. At the same time, Rumsey co-authored the book “Rumsey’s Practice” with his son-in-law.

Justice Rumsey was married to Ella Moore Rumsey and had a son David and two daughters, Blanche Rumsey Evans and Mrs. John S. Sheppard. He passed away in 1903 at the age of 62.