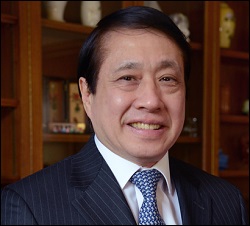 Justice Peter Tom’s career spanned over 30 years from his appointment as a Housing Court Judge to his position as the senior justice and Acting Presiding Justice of the Appellate Division, First Department. Justice Tom held a number of judicial “firsts” for an Asian American.

Justice Peter Tom was born in Canton, China and arrived in the United States at the age of eight from Hong Kong. After graduating from Brooklyn Law School in 1975, he practiced briefly at private law firms before embarking on a long and distinguished career in the judiciary. In 1976, he joined the Civil Court of the City of New York as a Law Clerk, working on a wide variety of criminal and civil assignments. In April, 1985, he was the first Asian American appointed to the Housing Court of the City of New York, where he disposed of more than 4,000 landlord-tenant cases. Many of Justice Tom’s novel rulings in the Housing Court had significant impact over the lives of residents in New York City and received wide coverage in the New York Law Journal and various local newspapers.

In November, 1987, Justice Tom was one of the first Asian Americans elected to the Civil Court of the City of New York. In winning the Civil Court, he further broke new grounds as one of the first Asian Americans to win a county-wide contested election in Manhattan. In a landmark decision, Justice Tom utilized a 100 year old “Bawdy House Statute” (RAPAPL § 715) for the first time to evict drug dealers from residential property. Employing Judge Tom’s novel ruling, Manhattan District Attorney Robert Morgenthau and the City of New York established a Narcotics Eviction Part throughout the city’s Civil Courts, using this statute to effectively evict drug violators from residential and commercial properties.

In November, 1990, Justice Tom became the first Asian American elected to the New York State Supreme Court in New York County. During his tenure in Supreme Court, he was assigned to the Protracted Trial Part, where he presided over complex commercial and medical malpractice trials.

In January, 1994, Justice Tom became the first Asian American appointed to the Supreme Court, Appellate Division, First Department, and for the next 14 years was the only Asian American to serve in the Appellate Division of the State of New York before another two Asian American, Justice Randall Eng was appointed in 2008 to the Second Department and Justice Jefferey Oing was appointed in 2017 to the First Department. Justice Tom has authored over 430 opinions and decisions, many of which have received front page coverage in the New York Law Journal. His opinions have been regularly affirmed by the Court of Appeals, and his dissents have often been the basis of reversal in that Court. The fairness of his decisions as well as his absence of ideological constraint have been remarked upon by commentators in the New York Law Journal and by colleagues of the bench and bar. Justice Tom was also Acting Presiding Justice of the Appellate Division, First Department in, 2007, 2009 and 2016. In 2019, Justice Peter Tom retired from his service after more that 30 years after he took the bench as a judge.

Justice Tom is active in the Asian-American community where he was raised and still resides. He has received numerous awards, notably the Trailblazer Award from the National Asian Pacific American Bar Association, the Louis D. Brandeis Award from the Jewish Lawyers Guild, the Ellis Island Medal of Honor, the Leadership Award from the Judges and Lawyers Breast Cancer Alert as Acting Presiding Justice of the First Department, and the Asian American For Equality Leadership Award. He has also been honored and received awards from legal institutions and associations including the New York County Lawyers Association, the Association of Law Secretaries to the Justices of the Supreme and Surrogates’ Courts, the Asian American Bar Association of New York, Chinese American Planning Council, New York University and Brooklyn Law School.

Historical Society of the New York Courts, Get to Know: Hon. Peter Tom, available at https://history.nycourts.gov/get-to-know-hon-peter-tom/