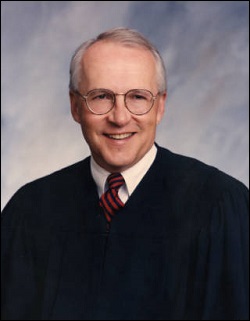 In 1997, Judge Wesley was appointed to the Court of Appeals. See his full biography HERE.

Richard C. Wesley received his Juris Doctor degree from Cornell University Law School where he served as editor of the Cornell Law Review. He was admitted to practice in 1971 and practiced law in Geneseo, becoming a partner in the law firm of Streb, Porter, Meyer and Wesley. In 1979, he was appointed assistant counsel to Assembly Leader James L. Emery and was elected as a member of the New York State Assembly for the 136th Assembly District. In 1985 he was named Legislator of the Year by the Livingston-Wyoming Association of Retarded Citizens. He is also a past Chairperson of the Livingston County Alcohol and Drug Abuse Prevention Council. He was secretary to the Livingston County Bar Association in 1979 and also served as a member of the Seventh Judicial District Grievance Committee. Justice Wesley was elected to the Supreme Court in 1986 and served as the Administrator of the Judicial Hearing Officer Program and as Supervising Judge of the Criminal Courts of the Seventh Judicial District. Justice Wesley was appointed to the Appellate Division, Fourth Department by Governor Cuomo on March 25, 1994. He served on the Court until he was designated to the Court of Appeals by Governor George Pataki on January 3, 1997. He served on the Court of Appeals until 2003, when he was appointed to the United States Court of Appeals for the Second Circuit by President George W. Bush.