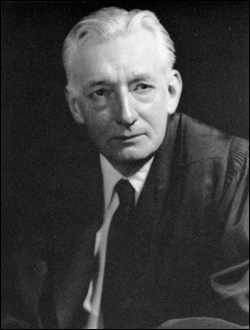 Justice Herbert D. Hamm was born in Poestenkill in Rensselaer County in January 1896 (the same month the Appellate Division heard its first cases). He graduated from Troy High School and Rutgers University and Harvard Law School. His studies were interrupted by service in the Navy during World War I. He was admitted to the bar in 1925 and practiced in Troy. He served as Rensselaer County Attorney from 1940 to 1945. In 1945, Gov. Dewey appointed him acting Rensselaer County Judge upon the resignation of Hon. Harry E. Clinton. Later that year, he was elected to a full six year term as County Judge and Judge of the Children’s Court. In February 1951, Gov. Dewey named Justice Hamm to the Supreme Court to succeed Hon. William H. Murray. He was then elected to a full 14-year term. In 1964, he was designated to the Appellate Division, where he served until his retirement in 1966 due to failing health. Justice Hamm was a regent of the Sons of the American Revolution. He died in 1972, at the age of 76. Justice Hamm’s father was a prominent doctor in Troy. His mother was Ella L. De Freest. At his memorial service, Justice Mahoney noted one of his characteristics as a trial judge. Whenever a trial lawyer conducted himself in a manner not in keeping with Justice Hamm’s view of proper procedure, a vein in his right temple seemed to enlarge itself and take up a life of its own by beating and pulsating noticeably. Invariably, when this occurred, the offending attorney would mollify his method, and, invariably, the vein would slow its beat and finally stop and return to whatever pocket or enclosure years of trial experience of its owner had prepared for it. Justice Mahoney opined that this effect on attorneys must have mystified the judge but the judge probably attributed it to his stern visage on the bench.