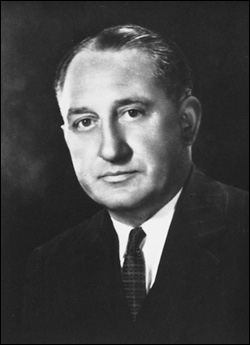 Justice William H. Coon was born in Homer, Cortland County, at the turn of the century, on October 5, 1899. He received his earlier education in the Homer schools and graduated from Homer Academy in 1918. He graduated from Cornell Law School in 1922. He started practice with Albert Haskell Jr. and then opened his own practice in 1925. Shortly thereafter, he became associated with Senator Lusk and soon became a member of the law firm of Lusk, Buck, Ames and Coon. In 1926, he became Secretary of the Civil Service Commission of the City of Cortland and, in the same year, was appointed assistant city attorney for the City of Cortland in which capacity he served until 1935. In 1928, he was elected Cortland County District Attorney. He resigned in 1935 to successfully run for the office of Cortland County Judge and Surrogate and Judge of the Children’s Court; he served until the end of 1941. In November 1941, he was elected Supreme Court Justice for the Sixth Judicial District. He was elevated to the Appellate Division at the beginning of 1950. He retired from the bench (and the Appellate Division) at the end of 1963. Justice Coon was an avid outdoorsman and a man of few words, and admirably succinct in written opinion. He died on August 3, 1968. In 1957, he wrote the Appellate Division decision striking down a ban by the Board of Regents on the motion picture “Lady Chatterly’s Lover.” The Court concluded the picture could not be considered obscene in the way that term was interpreted judicially.