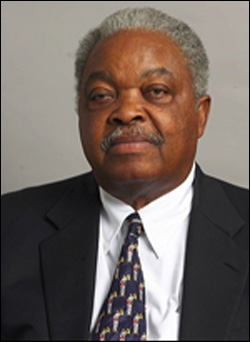 Samuel L. Green was admitted to the bar on April 3, 1968 after graduating from the State University of New York at Buffalo School of Law. Following six years of successful practice he accepted an appointment to Buffalo City Court in 1973. Justice Green never regretted leaving behind his practice, saying, “I was able to help people. I could make kids go back to school. I could make people get a job. You could see results. You could get results.”

After serving five years at the City Court Justice Green ran for Supreme Court, easily winning the election and in the process becoming the first African-American judge outside of New York City to be elected to a state judgeship. On February 25, 1983 he became the first African-American Justice at the Appellate Division outside of New York City when Governor Mario Cuomo appointed him to the Fourth Department. In 2002, Justice Green was designated under the New York Constitution, article VI, ß 2, to serve on the Court of Appeals for the June session. He also served on several statewide commissions, including the Judicial Commission on Minorities and the State Task Force on Permanency Planning for Children in Foster Care. In 1995 Justice Green received an award of merit for distinguished service, trial bench from the New York State Trial Lawyer’s Association.

During his term at the Fourth Department Justice Green was also active in the Buffalo community, becoming a lifetime member of the NAACP and the Buffalo Urban League as well as serving on the governing board of the Albright Knox Art Gallery.

Justice Green had been certified to serve six years on the bench past the mandatory retirement age of 70. In 2011 he retired after exhausting his extension, but his tenure at the bench of twenty-eight years makes him the longest serving Associate Justice of the Fourth Department.