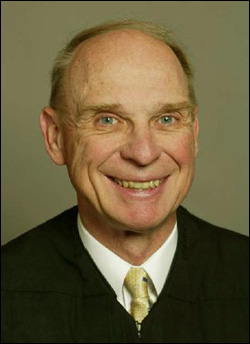 Robert G. Hurlbutt received his Bachelor of Laws and Juris Doctor, Cum Laude, from Albany Law School in 1964. Following his admission to practice on December 10, 1964, he practiced law with Leonard H. Amdursky in Oswego, New York and became a member of the firm of Amdursky and Hurlbutt in 1971. He served as Town Attorney for the Town of Minetto between 1972 and 1975. Between 1977 and 1982, he served as Oswego County District Attorney. He was elected as Oswego County Court Judge in 1982 and was elected to the Supreme Court in 1987 and re-elected in 2001. In February 1999 he was designated by Governor Pataki to the Appellate Division, Fourth Department. Justice Hurlbutt currently serves as a member of the Pattern Jury Instructions Committee and is a member of the New York State Supreme Court Justices’ Association. Additionally, he serves as the Court’s representative on the Statewide Committee on Attorney Admissions. He is a member and past President of the Oswego County Bar Association and a member and Fellow of the New York State Bar Association. Between 1978 and 1982, Justice Hurlbutt was an adjunct Professor of Criminal Law and Procedure at the State University of New York at Oswego, and between 1970 and 1972 he served the same institution as an adjunct Professor of Business Law. Justice Hurlbutt retired effective December 31, 2009.