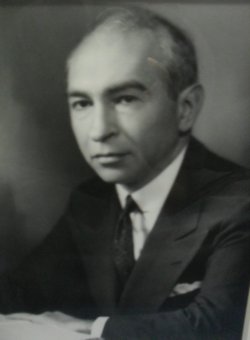 It was said of Justice Aron Steuer that he “had an intellect clear, formidable and with a fine cutting edge that left no one in doubt of its elegance and power.” (Obituary, New York Times, December 10, 1985, p. B10.) He was known for his concise style and incisive legal thinking.

Aron Steuer was born in New York City on October 22, 1898, the son of Max D. Steuer, a renowned trial lawyer. The younger Steuer graduated from Harvard in 1920, after his education was interrupted by Army service. He served in World War I as a Corporal in the 304th Battalion Tank Corps. He later received his law degree from Columbia University Law School in 1923. Upon admission to the Bar, he joined the firm of White & Case. After four years, he went into practice with his father.

Steuer’s judicial career began in 1929, when he was elected justice of the City Court, New York City. Three years later he was elected to the Supreme Court bench, where he remained until 1961, when he was appointed to the Appellate Division First Department by Governor Rockefeller. When he reached the mandatory retirement age of 70, Steuer was designated as supernumerary, to continue service beyond retirement. He stayed until 1974. At that time, the five justices of the Appellate Division voted unanimously to create for Justice Steuer the unsalaried post of Judicial Administrative Officer, to oversee projects for the courts. He remained in that position until 1985, the year of his death.

The Special Masters Program of the Appellate Division First Department was begun in the 1970s when retired Justices Steuer and Capozzoli began to meet with the parties to an appeal in an effort to reach a settlement. Over the years the Program has been expanded and formal court rules adopted for its administration.

The judge also had a fondness for contract bridge and had a regular Monday night game with well-known tournament players. He was even written up in Sports Illustrated and Contract Bridge, the regular column written by Albert H. Morehead.

Justice Steuer was married to Virginia Tracy Clark Steuer, a former Broadway dancer, in 1928. They had three children, one of whom passed away while still in his teens. Justice Steuer died on December 8, 1985, at age 87.