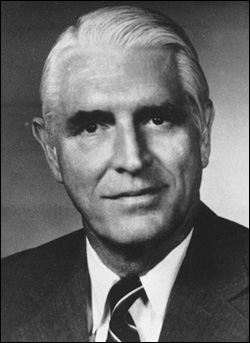 Justice T. Paul Kane was a native of Washington, D.C., and the son of a national bank examiner. He grew up in Poughkeepsie and completed his undergraduate education at Yale in 1942. He was active in crew and Naval ROTC at Yale. Prior to entering Albany Law School, from which he graduated in 1948, Justice Kane was called to active duty in 1942 as a commissioned ensign in the United States Naval Reserve. He served for one year on the USS Blakeley as a gunnery officer in the Caribbean and South Atlantic. He then served on the destroyer USS Paul Hamilton for 2 1/2 years, first as a gunnery officer and later as executive officer. He was discharged at the end of 1945. Upon graduation from law school, and admission to practice on September 16, 1948, Justice Kane entered the office of Jones & Jones in Cobleskill, Schoharie County. Subsequently, he practiced alone until being elected Schoharie County District Attorney in 1950. In 1964, Gov. Rockefeller appointed him to the Supreme Court; he was elected to the post that same year and re-elected in 1978. He was designated to the Appellate Division in 1972, where he served until he retired in 1990 at the age of 70. Upon leaving the Court, Justice Kane joined the Albany office of Hiscock & Barclay as resident counsel. He later left the firm and practiced out of Cobleskill. He died in December 2002.