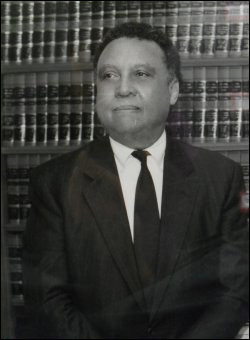 Justice Milton L. Williams was born in Augusta, Georgia on November 14, 1932. His family moved to New York City when he was very young. He attended DeWitt Clinton High School (Class of 1951), where he lettered in football. After high school, he served in the Navy as a Radioman 2nd Class Petty Officer and was honorably discharged in 1955. He joined the New York City Police Department in 1957 and, while employed there full time, attended college (New York University Class of 1960) and law school (New York Law School Class of 1963). Upon law school graduation, he began his legal career at Allstate Insurance Company, as their first black staff attorney.

Justice Williams enjoyed a long and diverse career in public service. Aside from his 15-year tenure at the Appellate Division, First Department, where he served as Presiding Justice (2002) and Associate Justice (1993-2002; 2003-2008), his judicial career included service as Deputy Chief Administrative Judge for the New York City Courts from 1985-1993; as Administrative Judge of the Supreme Court, Criminal Term, New York County from 1983-1985; and as Supervising Judge of the New York County Criminal Court from 1978-1983. He was appointed to the New York City Criminal Court in 1977, appointed an Acting Supreme Court Justice in 1978, and elected to the Supreme Court of the State of New York in 1984.