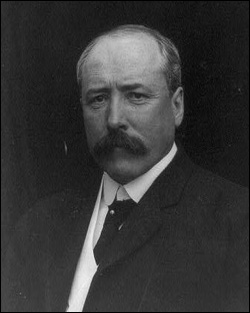 In 1898, Judge Parker was elected to the Court of Appeals as Chief Judge. See his full biography HERE.

Alton B. Parker has been described as the most unfairly forgotten of forgotten men. (Irving Stone, They Also Ran: The Story of the Men Who Were Defeated for the Presidency, Doubleday & Company, Inc., Garden City, NY, 1943, p. 81.)

Alton Brooks Parker was born on May 14, 1852 in Cortland, New York. He attended Cortland Academy and Cortland Normal School, where he trained as a teacher. He taught for a time in Binghamton. After teaching, he accepted a clerkship at the law offices of Schoonmaker & Hardenburgh in Kingston and then enrolled at Albany Law School, from which he graduated in 1873. Shortly thereafter, Parker went into partnership with a law school classmate, creating the firm of Parker & Kenyon, which lasted until 1878.

Parker became active in politics and was elected as Ulster County Surrogate in 1877 at the age of 25. He was reelected six years later. Parker rose quickly in Democratic Party ranks. He was a delegate to the state convention in 1882 and was an early supporter of Grover Cleveland’s candidacy for governor. When Cleveland ran for President in 1884, Parker was a delegate to the Democratic National Convention in Chicago.

In 1885 Governor Hill appointed Parker to the Supreme Court bench to fill a vacancy. He was elected the following year to a full 14-year term. When the state constitution was amended in 1889 to create a Second Division of the Court of Appeals, Governor Hill appointed Justice Parker to sit on that bench until its dissolution in 1892. During that time he was approached by the Democratic Party to run for governor or U.S. senator. He refused.

Governor Flower appointed Justice Parker to the General Term of the First Department in 1892, where he stayed until 1896 when the Appellate Divisions were created. He then resumed his duties as trial judge until 1897, when Governor Black designated him to the Appellate Division First Department to temporarily replace the ailing Justice George C. Barrett. In November of that year, Parker ran for Chief Judge of the Court of Appeals and won. He presided over that court from January 1, 1898 through 1904. In 1904 his name was floated as the possible Democratic candidate for President of the United States. The Republican nominee was incumbent Theodore Roosevelt. Parker bowed to public and party pressure, resigned from the Court of Appeals and ran unsuccessfully for President. He lost in a landslide.

After his defeat, Parker returned to a successful private law practice in New York City. He remained a friend of labor, representing Samuel Gompers and, in the Danbury Hatters case, the American Federation of Labor, before both the U.S. Supreme Court and the U.S. House of Representatives. he served also as chief prosecution counsel in the impeachment trial of new York Governor William Sulzer.

Parker was also active in bar goups. He was a founder and director of the American Bar Association and twice served as its president.

Judge Parker married Mary L. Schoonmaker in 1873, and they had two children, a son and a daughter. The son, John, died of tetanus as a young child. Judge Parker died suddenly on May 10, 1926 at age 73 of heart disease.

The Judges of the New York Court of Appeals: A Biographical History, Albert M. Rosenblatt [ed.], The Historical Society of the Courts of the State of New York, New York, 2007, pp. 293-304.