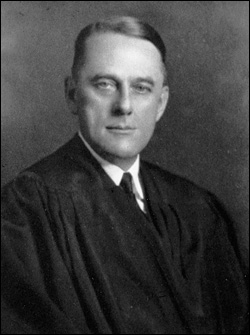 Justice O. Byron Brewster was a direct descendant of Elder William Brewster of the Mayflower. He was born in the tiny Adirondack village of North Elba, which later became part of Lake Placid. He graduated from Lake Placid High School in 1904, attended Amherst College for one year, and in 1908 was graduated from Syracuse University. After two years at Albany Law School he was admitted to the Bar and began to practice in Elizabethtown, Essex County. He was appointed chairman of the Essex County Board of Elections in 1912. Four years later, he was elected Essex County District Attorney and served until 1927. Then he was elected to the Supreme Court, Fourth Judicial District, and was re-elected 14 years later. In 1937, he became president of the board of trustees of Paul Smith College in the Adirondacks. Gov. Dewey named him to the Third Department, effective January 1944. He remained on the appellate bench until June 1952 when he retired because of ill health; his designation expired January 17, 1953. He died October 27, 1953, at the age of 67, in Albany Hospital. Justice Brewster was a student of history and was the author of a State historical society paper on John Brown, the abolitionist who was hanged after the Harper’s Ferry raid. Brown had lived in North Elba. Justice Brewster’s parents were pioneers in the Lake Placid area.