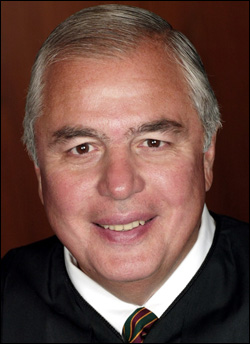 Presiding Justice Cardona graduated from Manhattan College in l962. He served in the United States Navy from 1963 to 1967 and served as a Naval officer in the Vietnam War. Following his honorable discharge, he attended Albany Law School and graduated in l970. Presiding Justice Cardona practiced law for 14 years, a span which included a two-year period as a part-time attorney with the Albany County Public Defender’s office and service as a Law Guardian in Albany County Family Court. His judicial career started as Albany County Family Court Judge in l985, where he served until he was elected to the Supreme Court effective January 1, 1991. He was re-elected to the Supreme Court in 2004. Presiding Justice Cardona was appointed Administrative Judge for the Third Judicial District in January 1992 and served in that capacity until his designation to the Third Department. Presiding Justice Cardona served as co-chair of the Family Violence Task Force established by Chief Judge Kaye, from 1994-2005; served as a member of the Board of Trustees of Albany Law School; and was a member of the Council of Chief Judges of the American Bar Association and served as the Council’s President from 2002 to 2003.

Upon Presiding Justice Cardona’s passing on December 4, 2011, his colleague Justice Edward Spain said, “He was an exceptional person and a magnificent leader. He was pasionate about getting the job done and getting it done right.”