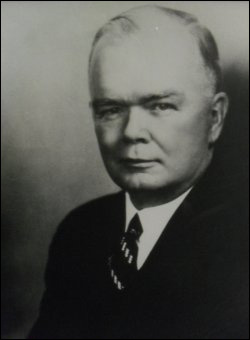 Edward J. Glennon was born in New York in 1884. As a young man he graduated from Fordham. He began his public career at age 30, when, in 1914, he became an Assistant District Attorney in the Bronx, when Bronx County was created. From there he went on to become Deputy City Chamberlain and then, in 1919, Deputy Public Service Commissioner.

Governor Smith appointed Glennon Justice of the Supreme Court, 1st Judicial District, in 1920, to fill a vacancy. Upon completion of that temporary designation in 1921, he was appointed District Attorney of the Bronx, a position he held until 1923, when he was elected to a full term on the Supreme Court bench. Governor Lehman named him to the Appellate Division First Department in 1933, and he was redesignated by Governor Dewey in 1951.

Justice Glennon was best known for writing the opinion of the Appellate Division in its 1941 unanimous decision in favor of James C. Petrillo and the American Federation of Musicians. A suit had been brought by the American Guild of Musical Artists contesting Mr. Petrillo’s claim to jurisdiction over virtuoso musicians. As a result of that decision, Efrem Zimbalist, Jose Iturbi, Josef Hofmann, Albert Spalding and others joined the union.

Justice Glennon passed away on September 6, 1956, at age 71, of a coronary occlusion.