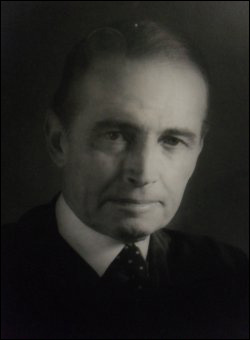 From his election to the State Assembly in 1939, Owen McGivern was known for his strong, persuasive and witty public speaking. “He was master raconteur,” former New York City Mayor Edward I. Koch said. “He had the gift of the leprechaun. He beguiled audiences with his humor and intelligence.”

Owen McGivern was born on November 4, 1910, in New York City. After graduating from Regis High School, he attended Holy Cross College, graduating in 1931. He received his law degree from St. John’s University Law School in 1934, the same year he was admitted to the Bar.

He became an associate of James J. Dooling, former Democratic leader of New York County, in the latter’s law office. In 1937, McGivern joined the law firm of Donovan, Leisure, Newton & Lumbard. Two years later, he was elected to the New York State Assembly, where he served until 1950. Although militarily deferred as a New York State Assemblyman, McGivern joined the Navy during World War II to subsequently serve as Office of Strategic Services’ Naval Liaison Officer.

McGivern’s judicial career began in 1950, when he was elected a Justice of the City Court of New York City. He remained on that bench until 1953, the year he was elected to the Supreme Court, 1st Judicial District. In 1965, McGivern was the Democratic candidate for Associate Judge of the Court of Appeals. However, he was defeated by former Senator Kenneth B. Keating. Two years later, Governor Rockefeller appointed McGivern Associate Justice of the Appellate Division First Department.

In 1974, Governor Wilson designated Justice McGivern as Presiding Justice of the Appellate Division, succeeding Justice Harold A. Stevens, who was appointed to the Court of Appeals on an interim basis. However, after one year as Presiding Justice, McGivern resigned his position, declaring that continuing on the bench “would work a financial deprivation on his family.” He said he was leaving for “personal and family reasons” and cited “the educational costs of a large family” (four of his five children were of college or pre-college age at that time). He became of counsel to the law firm of Donovan, Leisure, Newton & Irvine. Coincidentally, Justice Stevens, who had returned to the Appellate Division in 1975 after serving his interim appointment at the Court of Appeals and subsequently losing the November election to that court, was redesignated Presiding Justice of the Appellate Division First Department, succeeding Justice McGivern.

1975, the year McGivern stepped down, was the year that New York City was facing possible bankruptcy. After his resignation, McGivern was called upon by New York City Mayor Abraham D. Beame to head up the Temporary Commission on City Finances, a group formed to study the city’s fiscal problems and develop legislative programs to ease some of the financial problems. After two years of study, the group concluded that the city was spending too much on city personnel benefits, and its high taxes on businesses were driving them from the city. Recommendations were made for wide-reaching budget cuts and downsizing of government services.