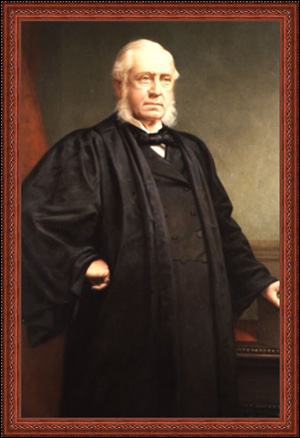 Charles Andrews was one of the longest serving judges in the history of the Court of Appeals. At 26, he became the youngest elected District Attorney of Onondaga County, and at 43 was elected to the Court of Appeals. A man of extraordinary vitality, he served for 27 years, covering 112 volumes of the New York reports. As if to punctuate this point, his son, William S. Andrews, served on the Court from 1917 to 1928. After Judge Charles Andrews was forced to retire from the bench because of the constitutional age limit, he continued to remain active.

Even up until a few years before his death at the age of ninety-one, Judge Andrews regularly engaged in outdoor activities, such as horseback riding. When advancing years finally compelled him to retire from physical activities, he refused to retire his intellect, believing it a perilous and fatal thing for an old man to still his mind. Once, upon reading an article announcing his friend’s retirement, Andrews entered his friend’s office, waived the article before his friend’s eyes, and voiced, “What is this I hear? What is this I see?”

Judge Andrews outlived all the members who sat in the Court when he joined it. Of the judges sitting when he left it, not one was on the Court and only two had survived. His friends and associates remembered his dignity, his kindness, his patience, and his serenity. Judge Alton B. Parker reflected:

He was pre-eminently fitted for a judicial career, and wore the ermine with infinite grace. His legal capacity was indeed great, his learning profound, his courtesy unfailing, his intelligence most keen, his integrity irreproachable, his work conscientious and his opinions ever rank with the highest of our authorities. His even justice, broad charity and invariable kindliness were an inspiration to the bench and bar.

Born in Oneida County on May 27, 1827, Andrews graduated from the Seminary of the Oneida Conference at Cazenovia, and studied law in the office of Sedgwick & Outwater in Syracuse. After his admission to the bar in January 1849, Andrews embarked on a successful legal career, making significant contributions to the then young city of Syracuse. In 1851, Andrews and Charles B. Sedgwick formed a law firm there, which George N. Kennedy joined in 1855. Well known for its prominence and ability, the firm continued until Andrews’ election to the Court of Appeals in 1870. Notably, Sedgwick and Kennedy became Supreme Court justices.

In 1853, Andrews was elected District Attorney of Onondaga County, serving for three years. In 1861 and 1862, Andrews served as the first “war mayor” of Syracuse. During this time, he actively participated in the efforts of his war committee to stimulate recruitment, which resulted in two full regiments being formed within a short time, and his patriotic efforts succeeded in repressing attempted disruptions by local “Copperheads.” After gaining Statewide attention from his vigorous administration of affairs, Andrews served as a Delegate at large to New York’s 1867 Constitutional Convention.

In 1868, Andrews was again elected Mayor of Syracuse, and served until he was elected as an associate judge on the Court of Appeals in 1870. The Court had been reorganized by amendment to the Constitution, and Andrews became a member of the newly established Court.

In 1881, Governor Alonzo B. Cornell appointed Andrews as Chief Judge to succeed Chief Judge Charles J. Folger (1818-1884), who had resigned to accept the office of Secretary of the United States Treasury. In 1882, the Republican party nominated Andrews for the Chief Judgeship, but he was defeated by his next door neighbor, William C. Ruger (1824-1892). That year the entire Republican ticket was defeated by tremendous majorities, in consequence of Republican factional quarrels, and Grover Cleveland was elected New York’s Governor. Notably, the votes against Andrews were significantly less than those against the head of the ticket. After his defeat, Judge Andrews resumed his place as associate judge and at the end of his first term in 1885 was reelected as associate judge for a second term of fourteen years.

In 1892, Andrews was elected Chief Judge to succeed Chief Judge Ruger, who died in January of that year. On December 31, 1897, after 27 years of service, Andrews retired from the bench at the age of seventy.

After his retirement, Andrews lived his remaining years in Syracuse, whose citizens held him in rare honor and affection, referring to him as the “first citizen of Syracuse.” Andrews did not engage in the active practice of law, but worked on important cases in which his legal opinions were solicited. Theodore Roosevelt advanced him as a possible candidate for Governor.

Outside of his legal career, Andrews enjoyed travel, fishing, and horseback riding. He could often be seen riding his horse through the streets of Syracuse or driving about with his wife in their carriage, which they preferred to the automobile. He was a fluent and eloquent public speaker.

Judge Andrews devoted much of his time and energy to education and the church. From the time of its foundation in 1879, Andrews served as one of the trustees of Syracuse University, and continued in that capacity until 1918. The university conferred on him a degree of Doctor of Letters; Hamilton, Columbia, and Yale awarded him the degree of Doctor of Laws.

A devoted member of the Episcopal church, Andrews attended his parish duties regularly, serving as vestryman, warden, and senior warden at St. Paul’s church in Syracuse. For many years he was a delegate to the diocesan convention of the Episcopal diocese of Central New York and served as chancellor of the diocese.

Judge Andrews also served as member of various ecclesiastical courts. In this capacity, he considered some of the most important crises which confronted the church in America, including the trial of Dr. Cropsey for heresy in Rochester. He died on October 22, 1918, and is buried at Oakwood Cemetery in Syracuse.

He is well remembered around Onondaga County and beyond. The Charles Andrews Elementary School was located on Salt Springs Road in Syracuse. Bruce Andrews, a descendant of Judge Charles Andrews, attended the school for several years. It has since been converted to senior citizen housing, called “Brick School Terrace,” although “Charles Andrews School” is still engraved on the front of the building.

American Jurisprudence: An Address Delivered Before the Graduating Classes at the Seventy-Fourth Anniversary of Yale Law School, on June 27th, 1898, Connecticut (1898).