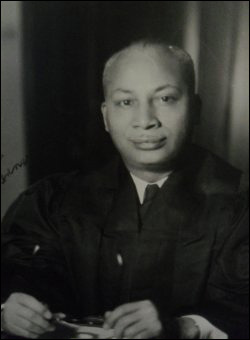 In 1974, Judge Stevens was appointed to the Court of Appeals. See his full biography HERE.

The first African American to be appointed to New York State’s highest court, the Court of Appeals, Judge Harold Stevens was known as one of this nation’s most outstanding jurists.

Harold Arnoldus Stevens was born on October 19, 1907, on a 1,000-acre farm owned by his father on John’s Island, South Carolina. He graduated from Benedict College in Columbia, South Carolina. After being rejected from the then-segregated University of South Carolina Law School, Judge Stevens enrolled in Boston College Law School and received his law degree in 1936. He had decided to pursue a career in law ten years earlier, after an incident in which a black woman and her two brothers, accused of killing a sheriff, were dragged from the jail in Aiken, S.C., towed through town behind a car, shot and mutilated. He later reflected on that incident and said, “There was no voice of protest raised. Then I was inspired to study law because it was our best bet to eliminate things like this.”

Having been admitted to the Massachusetts Bar, Judge Stevens began practice in Boston in 1936. Two years later, he moved to New York City. In the early 1940s, he was a counsel to the Brotherhood of Sleeping Car Porters and the Provisional Committee to Organize Colored Locomotive Firemen, and he was appointed by President Roosevelt to the Fair Employment Practices Committee. Judge Stevens was also a veteran of World War II. After the war, he was elected to the New York State Assembly in 1946, representing the old 13th Assembly District of Manhattan, and served two terms.

Justice Stevens’s judicial career and “string of firsts” began in 1950, when he was elected to the New York Court of General Sessions, becoming the first African American to sit on that bench. In 1955, he was appointed by Governor W. Averell Harriman to the New York Supreme Court to fill a vacancy and was elected to a full, fourteen-year term later that year, becoming the first African-American Supreme Court Justice in New York State. Stevens was appointed by Governor Harriman to the Appellate Division, First Department, in 1958, becoming the first African-American Associate Justice on the Appellate Division bench; and in 1969, Governor Nelson Rockefeller designated Justice Stevens as Presiding Justice of that Court, another first for an African American.

In January 1974, Governor Malcolm Wilson appointed Justice Stevens to the New York Court of Appeals to fill the vacancy caused by the election of Charles Breitel as Chief Judge. This gave him the highest rank of any African American in a state judicial system; he was the first African American to hold a seat on the Court of Appeals. Later that year he ran on the Republican, Conservative and Liberal tickets for a full term, but was defeated by Democrat Jacob D. Fuchsberg. And so, in 1975, Judge Stevens returned to the Appellate Division and resumed his post as Presiding Justice. He retired from the bench two years later.
As a judge, Justice Stevens created “sentencing panels” to review cases to avoid sentencing disparities that often reflected differences in race and economic status. As Presiding Justice of the Appellate Division, Stevens was the guiding force behind a program to build new courthouses.

Justice Stevens was active in the community as well, as a former President of the Catholic Interracial Council and a member of the Board of Trustees of the Catholic Charities of the Archdiocese of New York. A convert to Catholicism, Justice Stevens received from Pope Pius XII the Pro Ecclesia et Pontifice award, recognizing outstanding service to the Pope and to the Church. In addition, he received numerous honorary degrees as Doctor of Laws from the University of South Carolina, Fordham University, Benedict College and Creighton University.

Justice Stevens was married to Ella Clyde Myers Stevens. The couple had no children. He died on November 9, 1990, at age 83.

The Judges of the New York Court of Appeals, A Biographical History, Albert M. Rosenblatt [ed.], The Historical Society of the Courts of the State of New York, New York, 2007, pp. 753-759.