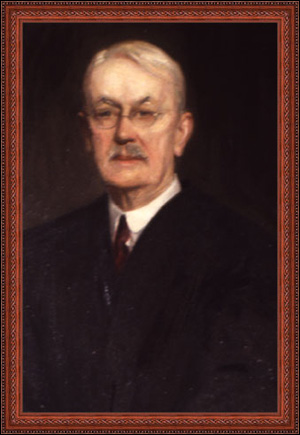 William S. Andrews was the son of Chief Judge Charles Andrews (1827-1918), who served on the Court of Appeals from 1870 through 1897 and as its Chief Judge in 1881-1882 and 1893-1897. Born in Syracuse on September 5, 1858, William S. Andrews graduated from Harvard College in 1880, and from Columbia Law School in 1882. After his admission to the bar, Andrews embarked on a successful legal career. He returned to Syracuse and entered the firm of Knapp, Nottingham & Andrews, continuing as a partner until 1899. That year, he received the Republican nomination as Supreme Court Justice in the 5th Judicial District and was subsequently elected in 1900.

While on the bench, Judge Andrews sat over thousands of trials and impressed lawyers with his ability to easily strip cases down to their material issues. Enjoying trial work, he declined assignment to the Appellate Division several times before joining the Court of Appeals. In 1915, Judge Andrews entered the national limelight when he tried a $50,000 libel suit brought by William Barnes, one-time Republican leader in New York, against former President Theodore Roosevelt. Mr. Barnes, a former supporter of the President, sued Roosevelt for branding his methods “corrupt” and linking him with Charles F. Murphy, leader of Tammany. The trial lasted for more than a month, during which Roosevelt testified as a witness on the stand. Roosevelt eventually won the suit. During a part of the trial, his father Charles Andrews, then the former Chief Judge of the Court of Appeals, sat beside him on the bench.

Less than two years later, Governor Charles S. Whitman selected Andrews for a temporary appointment on the Court of Appeals. In 1921, the death of Judge Emory A. Chase created a vacancy on the Court and Judge Andrews sought the Republican nomination.

Just three weeks before the Republican State Convention met, however, Judge Andrews put his nomination in serious doubt. The Legislature had passed a bill providing for a $45,000,000 bonus payment to state veterans, and the constitutionality of the bill came before the Court. Judge Andrews wrote for a five to two majority of the court, holding that the bonus bond issue was unconstitutional. Afterwards, Judge Andrews received all the blame, and Republican politicians hesitated to nominate him in the belief that World War I veterans would vote against him. Reluctantly, the Republicans gave him the nomination and he ran against former Supreme Court Justice Townsend Scudder. Spending only $119, Judge Andrews won the election that November by a plurality of about 65,000 in a total vote of 2,227,000.

During his years on the Court, Judge Andrews wrote several well-known opinions, which include ones denying Soviet Russia the right to sue in New York courts; upholding the right of employees to picket peacefully; and denying all women school teachers the right to salaries equal to those paid male teachers. Judge Andrews is best known for his dissent in Palsgraf. There, the plaintiff was injured in an unforeseeable manner while waiting for her train on defendant’s platform. Judge Cardozo‘s majority opinion held that a defendant owes no duty to a plaintiff outside the foreseeable zone of danger. Writing for the three-judge minority, Judge Andrews disagreed, concluding that “[e]very one owes to the world at large the duty of refraining from those acts that may unreasonably threaten the safety of others.” The case has become a classic among law students and lawyers.

In 1928, upon reaching the 70-year maximum age limit, Judge Andrews was forced to retire from the bench. At retirement, Judge Cardozo praised Judge Andrews as one of the greatest jurists in New York’s history and pronounced his retirement as a “tragedy.” Judge Andrews was well rounded. In addition to his legal scholarship, he was an avid gardener, woodsman, and fisherman, spending a part of each vacation in the Canadian wilderness. His 122 lb. speckled trout, caught on a four-ounce fly rod, set an enduring record for the area.

After his retirement from the Court in 1928, Judge Andrews sat frequently as referee for the New York state courts. In the 1930’s, he led the fight against prohibition in New York as chairman of the Association Against the Prohibition Amendment. Judge Andrews was disappointed at the failure of prohibition and aimed to rectify the decade of fraud and corruption which prohibition produced. He declared that “morality may not be enforced by statute, nor may the Legislature make an act a crime and expect to enforce its decree unless it is, by general consent, held to be criminal.” In 1933, Governor Herbert H. Lehman appointed Judge Andrews to the committee that drafted the first liquor control bill for the state. He served as vice-chairman.

Outside of civic life, Judge Andrews spent a great deal of time with his wife, the famous author Mary Raymond Shipman, who he married on December 31, 1884. The couple enjoyed vacationing together. They traveled extensively, exploring, fishing, and shooting in the Canadian woods and taking sea cruses. Both loved the wilderness, hunting, and fishing.

Judge Andrews was a member of the Protestant Episcopal Church, the Fort Orange Club in Albany, the University Club and Century Association, both of New York, and the Triton Club of Quebec, Canada. In addition, Judge Andrews served as a fellow of the Royal Geographical Society and president of the Onondaga Country Club. He also received three honorary decrees. Syracuse University awarded him an LL D. in 1912, Columbia University following with a similar degree in 1923. He was made a Doctor of Literature by Syracuse in 1922.

In August 1936, Judge Andrews was found dead at age 77 in the bedroom of his Syracuse home, just three days after the death of his wife. According to the coroner, Judge Andrews died of a broken neck, apparently suffered when he fell from his bed during the night in an effort to reach a glass of milk that was always left for him on a bedside table. Because of the accident, his wife’s funeral was delayed so that joint services could be held. The couple was buried side by side at Oakwood Cemetery in Syracuse.

Richard (Pete) has two children: Sarah Huntington Andrews (1972- ), a speech pathologist in Eastern Massachusetts (who has a daughter, Amber H. Roehrich), and Christopher Page Andrews (1976- ), a computer programmer in New Orleans. John also has two children: Paul G. C. Andrews and Elizabeth A. Andrews, who are both students.

Chadbourne’s Public Service of the State of New York (1882).

The Decisions of the Court of Appeals in Recent Years and How They Have Affected Substantive Law, 12 Cornell Law Quarterly 433 (June 1927).