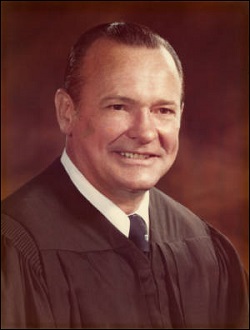 Michael F. Dillon was born in City of Lackawanna on April 20, 1927. He received his LL.B from the State University of New York at Buffalo Law School in 1951 and was admitted to practice in October of that year. He served as Corporation Counsel for the City of Lackawanna from 1958 to 1960. In 1963 he was elected as District Attorney for Erie County and held that office for 10 years. He was elected to the Supreme Court in 1973. On January 1, 1976, he was designated as an Associate Justice of the Appellate Division, Fourth Department. He was appointed Presiding Justice of the Appellate Division by Governor Carey on January 1, 1979 and reappointed to that position in 1987. He served as Presiding Justice until his death on July 9, 1991, having served in this position longer than any other Presiding Justice.