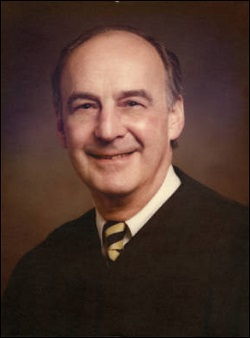 John H. Doerr received his BA degree from the University of Notre Dame and his LL.B from Fordham University School of Law. Following his admission to practice in 1949, Justice Doerr served as legal assistant to former Supreme Court Justice William B. Lawless. He was elected to the New York State Senate in 1964 and in 1967 served as General Counsel to the Committee on Conservation at the Constitutional Convention. He was elected to Supreme Court in 1968 and was appointed Administrative Judge for the Eighth Judicial District. He was designated an additional Justice of this Court in 1979 and as a member of the Constitutional Court in 1982. Justice Doerr served as a member of the Appellate Division’s Coordinating Committee to Review Proposed Amendments to the Code of Professional Responsibility. He retired from the bench on December 31, 1997. Justice Doerr died on November 25, 1999.