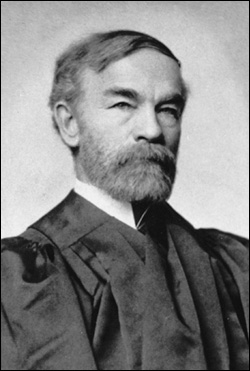 Justice S. Alonzo Kellogg was born in Champlain, Clinton County, on May 15, 1838. He was educated at the Champlain Academy and Middlebury College, graduating from the latter in 1860. He first practiced law in Nevada (then called Utah Territory) and during his residence there (near Virginia City) he was elected in 1864 as a senator in that State’s first legislature. When he returned East in 1866, he opened a law office in Plattsburgh in Clinton County. He was elected Clinton County District Attorney for one term, beginning 1876. From 1881 to 1890, he was Clinton County Judge. In 1890, he was elected to the Supreme Court for the Fourth Judicial District. He also served in 1890 as a member of the Constitutional commission appointed by Gov. Hill to revise the Judiciary Act. The commission’s report was influential at the 1894 Constitutional Convention which adopted reforms creating the Appellate Division. Justice Kellogg was appointed to the Appellate Division to succeed Justice Putnam who died in 1899. He retired from the Supreme Court in 1903 because of ill health. He died on March 12, 1904. His son, Henry T. Kellogg, succeeded him on the Clinton County Supreme Court and eventually was named to the Appellate Division and then the Court of Appeals. The Kellogg family lineage includes Elijah Kellogg, of Revolutionary War (Ticonderoga) fame and is connected to the great New York State Chancellor, James Kent, and to Secretary of State Frank B. Kellogg (during the Coolidge Administration). Justice Kellogg’s wife was a direct descendant of Zephania Platt, founder of Plattsburgh.