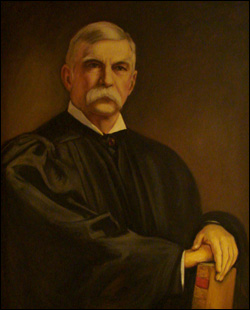 William H. Adams was born on March 27, 1841 in Lyons Village, Wayne County, NY. He attended village schools and took a course at the Walnut Hill School in Geneva, NY. He was for a time a soldier in the Union Army. On the day of his discharge, he began his study of law and was admitted to the bar on December 10, 1863. He practiced law in Canandaigua from that time until his election to the Supreme Court for the Seventh District, on which he sat from 1888 to his death. He was appointed to the Appellate Division for the Fourth Department in 1896, and elevated to presiding justice in 1900, which post he held at the time of his death in Canandaigua on October 12, 1903.