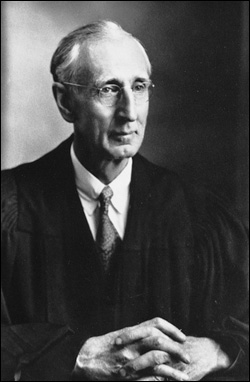 Justice Ellsworth C. Lawrence, a native of Vermont, was a graduate of Middlebury College and was admitted to the Bar in 1904. His career of public service began with two terms as the Franklin County District Attorney. He was elected Franklin County Judge and Surrogate in 1925 and served in that capacity until his election to the Supreme Court in 1932. In 1941, Middlebury College awarded him an honorary Doctor of Laws degree. He was appointed to the Appellate Division in January 1945 and served until he reached the mandatory retirement age and retired at the end of 1946. After retirement he served as an Official Referee. He was chief executive officer of the Northern New York School for the Deaf for many years. He died in a hospital in Malone, Franklin County, on October 17, 1954. His son, Ellsworth N. Lawrence, also served as a Franklin County Judge.