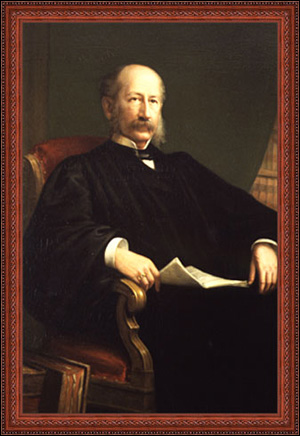 Although he served a remarkable 26 years on the Court of Appeals, Judge John Clinton Gray is perhaps best remembered for his role in two events that occurred in 1902, near the end of his first 14-year term on the Court: first, as the author of a compelling dissent in a landmark case concerning the equitable right to privacy and, second, as the central figure in a passionate uproar over the politicization of the judiciary. Over a century later, both issues continue to resonate in today’s legal world.

John Clinton Gray was born December 4, 1843, in New York City, a son of John A. C.-a wholesale dry goods dealer-and Susan Maria Zabriskie Gray. He received his early education in Paris and at the University of Berlin. In 1861, he returned to the United States and entered the University of the City of New York from which he graduated with an A.B. degree in 1865 and an A.M. in 1868. He also received an LL. B. degree from Harvard University in 1866.

After his graduation from Harvard, Gray returned to New York City to practice law. He was a member of the law firm of Davis, Eaton & Taylor, and, later, a senior member of Gray & Davenport, where he practiced chiefly in the area of corporate law.

In January 1888, Governor David B. Hill appointed Gray to fill the vacancy on the Court of Appeals caused by the death of Judge Charles A. Rapallo, and at 45 Gray became the youngest member of the Court.1 Gray had been a Republican until about 1884, when he became a Democrat, but was apparently uninterested in politics. When nominated, Gray was highly regarded as a practitioner and “spoken of in the highest terms by the most eminent judges and lawyers of [New York City], without distinction of party.”2 Later that year, Gray was elected to a full 14-year term, receiving 20,000 more votes in New York City than were cast for Grover Cleveland for President.

Near the end of Gray’s first term, the Court considered the case of a young woman who sought to enjoin a milling company from continuing its unauthorized use of her picture in its advertisements. She also sought $15,000 for mental distress allegedly caused by the widespread circulation of her picture. In Roberson v. Rochester Folding Box Co.,3 the Court addressed the novel question whether “the right of privacy exists and is enforceable in equity, and [whether] the publication of that which purports to be a portrait of another person, even if obtained upon the street by an impertinent individual with a camera, will be restrained in equity on the ground that an individual has the right to prevent his features from becoming known to those outside of his circle of friends and acquaintances.”
The majority-the Court split 4-3-exhaustively reviewed the authority offered to support such a right and ultimately concluded that none could be found. Though clearly sympathetic to plaintiff’s predicament, the Court held that “the so-called ‘right of privacy’ has not as yet found an abiding place in our jurisprudence, and, as we view it, the doctrine cannot now be incorporated without doing violence to settled principles of law.”4 The Court further noted “the absolute impossibility of dealing with this subject save by legislative enactment.”5

[i]t would be a reproach to equitable jurisprudence, if equity were powerless to extend the application of the principles of common law, or of natural justice, in remedying a wrong, which, in the progress of civilization, has been made possible as the result of new social, or commercial conditions [such as the advancement in photography].6

inconceivable . . . that these defendants may, unauthorizedly, use the likeness of this young woman upon their advertisement, as a method of attracting widespread public attention to their wares, and that she must submit to the mortifying notoriety, without the right to invoke the exercise of the preventive power of a court of equity.7

Judge Gray’s view eventually prevailed. Shortly after Roberson, the New York Legislature passed a statute criminalizing the unauthorized use of a living person’s portrait for trade purposes and creating a private right of action for such an “invasion of privacy.”8 Moreover, Judge Gray’s dissent was quoted extensively in decisions of other jurisdictions and lauded in the press as reflecting the public expectation for courts to protect the weak from the strong.

Also in 1902, Judge Gray found himself in the center of a political brouhaha. As the end of his first term approached, Judge Gray was in his late fifties”the prime of life, [with] many years before him in which [to] continue the good and great judicial work which he has already done.”9 The Albany Law Journal, a monthly publication on the law and legal community, urged both political parties to renominate Judge Gray.10 The Journal noted the then-“unbroken record” of renomination by both parties of all Court of Appeals judges so eligible who wished to continue their service. Such a tradition

shows the readiness of the people to disregard party lines in the renomination of able and worthy judges, who have rendered honorable and unremitting service to the public. The record of the past must not be destroyed. The same high estimate of judicial merit and of judicial integrity must be preserved, and the importance of its preservation could not receive a more striking illustration than in the present instance. . . . Judge Gray has, by his fourteen years of brilliant, enduring work, given ample evidence of the possession of those qualities everywhere recognized as indispensable in the judges of our highest courts. That he will be honored in the manner suggested, we have no doubt whatsoever.11

Wide and vociferous condemnation followed when, to fill Judge Gray’s seat, the Republicans nominated Judge William E. Werner of Rochester, a Supreme Court Justice already serving on the Court of Appeals by designation. Numerous prominent New York newspapers, as well as the State Bar Association, strenuously objected to the Republicans’ failure to honor the principle underlying the previously-unbroken rule of renomination by both parties. “The importance of the office, the danger of political encroachments on the independence of the judiciary, the integrity of free institutions, should enforce the observance of this rule.”12 Indeed, observance of the rule was perceived as mitigating “[w]hatever evils may inhere in the principle of an elected judiciary.”13 Letters to the editor of the New York Times echoed the lamentations and extolled the many judicial and personal virtues of Judge Gray.

As the election drew near, newspapers across the state and members of the Bar of the City of New York reiterated their support for Judge Gray’s candidacy and made impassioned pleas to the voters of both parties to reject the Republicans’ effort to inject partisan politics into the judiciary. Metropolitan New Yorkers expressed the additional concern that they be amply represented as the loss of Judge Gray would leave only one Judge from New York City-home to one-half of the State’s population and three-quarters of the legal business-on the Court of Appeals.

Judge Gray’s ultimate victory in the November 1902 election was praised as a triumph over “narrow partisanship.”14 According to the Albany Law Journal, the voting public

again showed themselves fit to be trusted in a great and crucial issue . . . the preservation of the character, authority and usefulness of the bench, free from the contamination of party politics. The result shows that the popular standard of judicial selection is as high as ever, and that it only needs full information and arousing to make sure that the standard will be applied fearlessly. The verdict of the people at the polls is that the parcelling [sic] out of the places to the ‘faithful’ shall stop short of the bench; that there shall be no division of seats in the highest court, as ‘spoils’ of office.15

It bears noting that Judge Werner was elected to a full-term in 1904, over Democratic objections that, by allowing himself to be nominated to run against Judge Gray in 1902, Judge Werner was no longer a member of the “non-partisan judicial class.”16

In 1913, Judge Gray reached the mandatory retirement age and his long tenure on the Court came to a close at the end of that year. Judge Gray died less than two years later, on June 28, 1915, at his summer home in Newport, RI. After a funeral in New York City attended by numerous judges and other prominent citizens, he was buried in Woodlawn Cemetery.

Judge Gray’s son, Albert Zabriskie Gray, married Marian Anthon Fish in 1907. They had a daughter, Marian Stuyvesant Gray, who married Edward Fiedler Livingston Bruen in 1942 and had two children: a son, Nicholas Livingston Bruen, who lives in New York, and a daughter, Dr. Marian Anthon Bruen, who married Dr. Charles Ainsworth Staveley Marrin in 1976. They live in Vermont, and have a daughter Minet Anthon Bruen Marrin, who is a Latin teacher. Nicholas, Marian, and Minet are also descendants of John Jay and Robert Livingston.

“Privacy and Publicity in the Early 20th Century,” available at http://historyofprivacy.net

Other than his numerous decisions, we are unaware of any articles or books by Judge Gray.