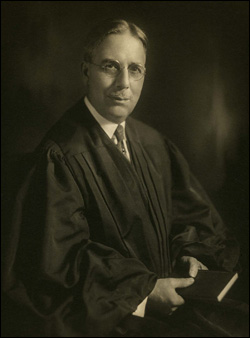 Justice Davis also sat on the bench of the 3rd and 4th Departments; more information can be found HERE and HERE, respectively.

Justice Rowland L. Davis was born on July 10, 1871 in Dryden, NY. He was educated at the District School in McLean, NY and graduated from the Cortland Normal School in 1896. He earned his LL.B. from Cornell University Law School in 1897. Davis was admitted to the Bar in 1897 and from that time until 1902, practiced law first at the firm of Bronson & Davis and then at Davis & Lusk. In Cortland, he was elected as police justice in 1899 and later, as Cortland’s first city judge in 1903.

On August 3, 1915, Gov. Charles S. Whitman appointed Davis to the Supreme Court for the Sixth District. He served two full terms, winning re-election in 1929. In 1921, Gov. Nathan L. Miller designated him to the Appellate Division, Fourth Department. That same year, Justice Davis wrote the majority opinion in a ruling that afforded wives equal rights to their husbands in determining the custody and residence of their children. At the completion of Justice Davis’ term in 1926, Gov. Alfred E. Smith assigned him to the Appellate Division’s Third Department, and in 1931, Gov. Franklin D. Roosevelt designated him to the Second Department. Davis resigned from his position at the Appellate Court in March 1939 and retired from the Supreme Court in 1941.

Davis’ memberships included the Cornell Law Association, of which he served as President in 1931 and 1932.

He married Iva A. Yager and had two children, Harriet and Rowland Jr. He died on February 1, 1954 in Cortland at the age of 82.