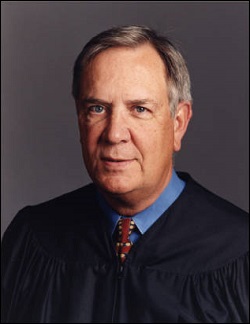 Donald J. Wisner graduated from the University of Notre Dame in 1963 and received hs law degree from Albany Law School in 1966. Following his admission to practice law that year, Justice Wisner served as a Captain in the U.S. Army Judge Advocate Corps until 1971. He returned to Rochester to practice law with Cusker & Cusker and joined the District Attorneyís Office. In 1976 he was appointed Chief of the Homicide Bureau where he prosecuted over 100 homicide cases. In 1978 he was appointed Chief Trial Attorney, and in 1979 and 1980 was designated as a Special Assistant U.S. Attorney to investigate and prosecute organized crime cases in U.S. District Court for the Western District of New York. In 1982 he was elected to Monroe County Court. He has served on assignment to Supreme, Family, and Surrogate Courts in many counties of the Seventh and Eighth Judicial Districts. In 1991 he was elected to Supreme Court and served regularly on assignment in New York County. In 1997 he was designated to the Appellate Division, Fourth Department. He served on a Joint Appellate Division Committee to Review Proposed Changes to the Code of Professional Responsibility and has also chaired the Indigent Appeals Management Counsel for the Seventh Judicial District. Judge Wisner retired effective September 1, 2004.