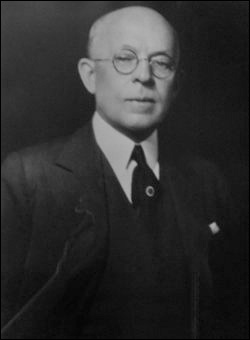 Clarence John Shearn was born in Leeds, Massachusetts in 1869. As a young man he graduated from Cornell University in 1890 and from New York Law School in 1893, the same year he was admitted to the New York Bar. In his private practice, he became attorney and legal crusader for William Randolph Hearst. In 1905, with Hearst’s backing, Shearn ran unsuccessfully for District Attorney of New York County on the Municipal Ownership League ticket. In 1908 he ran for governor on the Independence party ticket, again unsuccessfully.

Shearn was appointed to the Supreme Court 1st Judicial District bench in 1914. Two years later he was elected to a 14-year term. Governor Whitman designated him to the Appellate Division First Department in 1916, where he served until his resignation in 1919. He left to resume private practice at the firm of Shearn & Hare.

In 1924 Justice Shearn was counsel for the Transit Commission in the subway investigation conducted for Governor Smith by Supreme Court Justice John V. McAvoy, who found Mayor John F. Hylan responsible for subway congestion and exonerated the Transit Commission. In 1928 he was Governor Smith’s commissioner in the Queens sewer investigation that resulted in the conviction of Queens Borough President Maurice E. Connolly of conspiracy to defraud the city. As president of the Association of the Bar of the City of New York from 1935 to 1937, Justice Shearn was an initiator of the investigation into the ambulance-chasing racket. In 1938, William Randolph Hearst appointed him a voting trustee to reorganize the vast Hearst publishing and business holdings.

Justice Shearn married Eva Petty Shearn in 1932 and had two children, Clarence J. Shearn, Jr. and Mrs. Arthur L. Kerrigan. He died from a cerebral hemorrhage on February 12, 1953 at the age of 83.