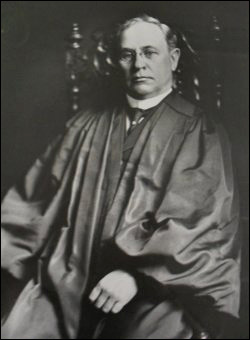 Justice Houghton also sat on the bench of the 3rd Department; more information can be found HERE.

Born September 1, 1856 in Corinth, New York, to Tilley and Charlotte Houghton, Justice Houghton attended Canandaigua Academy which at the time had an excellent reputation. Upon graduating, he taught school while studying law and was admitted to the bar at Rochester, New York in 1879. Early in 1880 he moved to Saratoga Springs and began practicing law, quickly gaining an excellent reputation for his hard work and careful preparation of cases.

In 1888, Justice Houghton was nominated by the Republican convention for the office of county judge. Despite his youth, he was elected by a large majority. His performance on the bench met with such vast approval that in 1894 he ran unopposed, being endorsed by the Democratic party as well as his own.

In 1899, Justice Houghton resigned his post as Saratoga County Judge to accept an appointment by Governor Theodore Roosevelt to the New York State Supreme Court. The following year he was elected to the Supreme Court, Fourth Judicial District, for a full fourteen-year term.

In 1901, Justice Houghton served for one month on the Appellate Division, Third Department bench; and then in September 1903, he was designated an Associate Justice of that Court by Governor Benjamin Barker Odell, Jr. for a five-year term, replacing Justice S. Alonzo Kellogg who had resigned.

In October of 1905, Justice Houghton resigned his Third Department post and was immediately appointed to the Appellate Division, First Department, where he remained until 1910, at which time he was reassigned to the Third Department. He remained there until his death on February 14, 1913.

Our County and its People – A Descriptive and Biographical Record of Saratoga County, New York, The Saratogian, The Boston History Company, 1899. 1.