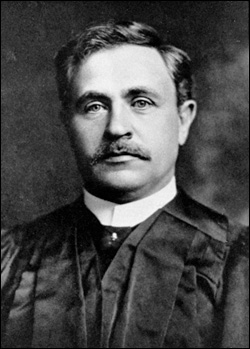 Justice Houghton also sat on the bench of the 1st Department; more information can be found HERE.

Justice James W. Houghton was born in Corinth, Saratoga County, on September 1, 1856. He graduated from Canandaigua Academy (Ontario County) in 1876 and then studied law (with H.L. Comstock and E.W. Gardner). He was admitted to practice in 1879 in Rochester. He thereafter practiced in Saratoga Springs. In 1888, he was elected Saratoga County Judge and re-elected in 1894. He resigned in 1899 to accept an appointment from Gov. Roosevelt to fill a vacancy on the Supreme Court; he was elected to the post the following year. He was designated to the Appellate Division in September 1903. He served on the appellate court until his death on February 14, 1913, following an operation in Boston for appendicitis. He also served on the Third Department court for one month in 1901 (November to December). His service for the Third Department was interrupted by service in the First Department from 1905 to 1910.