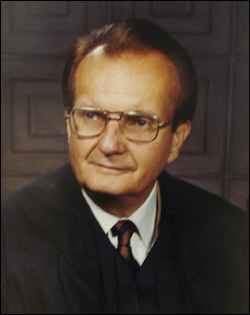 Thomas J. Lowery, Jr. was born in Syracuse in 1929. He graduated from Syracuse Law School in 1953 and was admitted to practice on November 10, 1953. He began private practice and became an expert in appropriation and tax certiorari matters, representing the municipalities including the City of Syracuse. He became County Chairman of the local Democratic Party in Onondaga County in 1970. In 1977, he was appointed to the Court of Claims. In 1987, he was elected as a Justice of the Supreme Court and in 1990 was appointed by Governor Cuomo as an Associate Justice of this Court. He died in office on August 17, 1990.