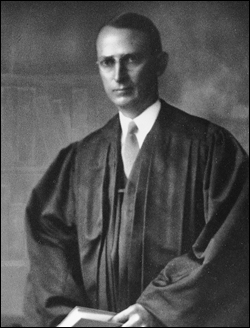 Justice Harold J. Hinman was born in Albany on February 22, 1877. He attended the public schools and graduated from Albany High School in 1895. He graduated from Union University in 1899 and from Albany Law School in 1901, the same year he was admitted to the Bar. After admittance, he practiced law with the firm Bender & Hinman; in 1912 it became Arnold, Bender & Hinman. From 1910 to 1915, Justice Hinman was an Assemblyman from Albany. In 1914 and 1915, he was majority leader. In 1915, he was a delegate to the Constitutional Convention. That same year, he accepted an appointment as a deputy Attorney General; he served in such capacity until the beginning of 1919. In 1918, Justice Hinman was a candidate for Attorney General but withdrew from the candidacy to successfully run for a seat on the Supreme Court, Third Judicial District. In January 1922, he was designated to the Appellate Division by Gov. Smith, and served on the Court for almost eleven years. He died at the age of 77 in 1955. He served on the Albany Law School Board of Trustees for over 35 years and as president of the board for 25 of those years.