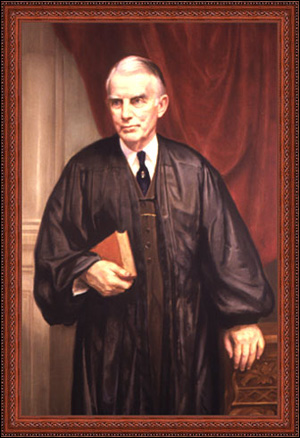 But for a brief period during World War I when, commissioned as a major in the United States Army Judge Advocate General’s Corps, he was assigned to Washington, D.C., Judge Edmund H. Lewis lived the 87 plus years of his life in the county of his birth, Onondaga County, in the heart of Central New York. In an address at the 1945 annual meeting of the New York State Bar Association, held in New York City, he proudly described himself as a “provincial” from “those regions known as ‘up-state’,” urging City lawyers to reap the benefit of acquainting themselves with “the hundreds of lawyers outside the metropolitan district whom you men in New York ought to know.”1

The son of a successful practicing attorney, Edmund Harris Lewis was born to Ceylon H. and Jennie (Heffron) Lewis in Syracuse on August 30, 1884. After attending Colgate Academy and Colgate University he received an A.B. degree from Yale in 1907, but returned home for his legal studies, which he pursued at Syracuse University where he was awarded an LL.B. degree in 1909. He later received an honorary Doctor of Laws degree from that school in 1937 and from Middlebury in 1940, from Colgate in 1948 and from Yale and Hamilton in 1954.2

The first twenty-one years of his professional life were a mix of public and private engagement. Upon his admission to the bar in 1909 he joined his father’s law practice at Lewis & Meatyard in Syracuse where he continued until entering public service as a Deputy Attorney General for the State of New York in 1915. In 1920, Mayor Henry H. Farmer appointed him Corporation Counsel of the City of Syracuse.3

Two years later, he returned to private practice as a member of the new firm of Mackenzie, Smith & Lewis, which became Mackenzie, Smith, Lewis & Michell in 1928. His time there was brief, cut short by his ascension to the trial bench in January 1930 as a Justice of the Supreme Court for the Fifth Judicial District following a contested election in the fall of 1929 in which he prevailed as the Republican candidate over Justice Gay H. Brown.4

After less than four years on the trial bench, in October 1933, Democratic Governor Herbert H. Lehman appointed him to the Appellate Division, Fourth Department, where he remained until January 3, 1940, when Governor Lehman again bestowed an appointment on him, this time as an Associate Judge of the Court of Appeals to fill the vacancy created by the resignation of Judge Irving G. Hubbs.5 The following November Judge Lewis was elected to a full term of fourteen years. He continued as an Associate Judge until sworn in as Chief Judge by Governor Thomas E. Dewey on April 22, 1953, filling the vacancy created by the sudden death of Chief Judge John T. Loughran a few weeks earlier.6 By that appointment Chief Judge Lewis became the fifth Chief Judge of the Court to come from Onondaga County.7 Elected to the office with bipartisan endorsement in November of that year, he continued in that position until his constitutionally mandated departure on December 31, 1954 following his seventieth birthday. As his retirement approached, the Syracuse Herald Journal observed that he was “the world’s highest-paid jurist with an annual salary of $35,000 plus $5,000 a year in lieu of expenses.”8 Remarks at the ceremony marking his retirement are published at 308 NY vii. During all his judicial career, the Judge maintained chambers in the Onondaga County Courthouse in Syracuse.

Declining the opportunity to continue as an official referee of the Court of Appeals, on his retirement he immediately shifted roles and on Monday, January 3, 1955, returned to private law practice when he rejoined his former firm, which now became Mackenzie, Smith, Lewis, Michell & Hughes, with the addition also of Senator John H. Hughes. His enthusiasm to be active mirrored a comment he made when interviewed some months before his retirement: “When I think what the future holds, I think it’s a wonderful time to live.”9

That his consuming interest and devotion to the law continued unabated is further demonstrated by the fact that on February 24, 1955 former Chief Judge Lewis appeared before the Judiciary Committee of the United States Senate to urge support of the confirmation of John Marshall Harlan as Associate Justice of the United States Supreme Court.10 By that time he had already entered on his term as President of the New York State Bar Association for 1955. His election to that office paid tribute to him both for his service to the profession and his civic-mindedness. In 1929 he served not only as president of the Onondaga County Bar Association, but of the Syracuse Chamber of Commerce (a position he held for two terms), the Syracuse University Club and as Chairman of the Managing Board of the Syracuse Community Chest. He was also a Syracuse University trustee and for 25 years Chairman of the Board of Trustees of First Presbyterian Church in Syracuse.

After his term as president of the New York State Bar Association he remained an active practitioner traveling daily to his firm’s office from the house in Skaneateles to which he had moved his family when he inherited the former Roosevelt property from his father in 1939. By happenstance, the property adjoined that of his early partner, Lewis P. Smith; after the Lewises took up residence, Judge Lewis and his former partner put together a small nine-hole golf course on their properties overlooking the lake for their mutual enjoyment and recreation. He remained a resident of Skaneateles until his death there on July 31, 1972, and was laid to rest in Lakeview Cemetery there.

During his years on appellate benches Judge Lewis was an infrequent dissenter, preferring whenever possible to see unanimity. He disliked unresolved controversy, and it was publicly reported that his colleagues on the Court of Appeals agreed, although they could not disclose individual instances, that he was the number one mediator of the seven-man bench long before he became Chief.11 One instance in which he did dissent was the ground breaking case of Woods v. Lancet12 which overruled Drobner v. Peters13 and recognized for the first time in New York a cause of action in favor of an infant plaintiff for prenatal injuries. Agreeing with the view of the majority of the court that prenatal injury to a child should not go unrequited by the one at fault, Judge Lewis believed “that the right should be the product of legislative action taken after hearings at which the Legislature can be advised, by the aid of medical science and research, not only as to the stage of gestation at which a foetus is considered viable, but also as to appropriate means-by time limitation for suit and otherwise-for avoiding abuses which might result from the difficulty of tracing causation from prenatal injury to postnatal deformity.”14

There were many tributes to Judge Lewis during his lifetime. Notably, in 1958, the New York State Bar Association awarded him its Gold Medal Award for “distinguished service in the law.”15 The Onondaga County Bar Association honored him at its eightieth annual dinner in 1955 when it presented a portrait of him from the Association to Syracuse University College of Law.16 The Syracuse Post Standard designated him as Man of the Year for 1954.17 The Syracuse College of Law dedicated its first volume of the Syracuse Law Review to him in 1949.18 He was included in Eminent Members of the Bench and Bar of New York 1943.19

In Memoriam remarks of Chief Judge Stanley H. Fuld concerning the death of Honorable Edmund H. Lewis were entered in the Court’s records on September 25, 1972. Although the recitation of the events that made up his life falls short of conveying a sense of the person he was, Chief Judge Stanley Fuld’s statement that Chief Judge Lewis “was a truly gentle man whose modesty, kindliness and consideration for the feelings of others endeared him not only to us, his associates, but to the Bar and Bench generally” offers some glimpse of the person he was. A broader view, not only of Chief Judge Lewis but of the Court itself, is to be found in a letter written to him sometime after their association ended by a former law clerk, who was himself a member of a family which had provided two associate judges to the court:20

You and your brethren, in everyone of whom simplicity is greatness, encourage between yourselves and your staff a closeness of personal relationship which starts a young lawyer on his career with a high perspective and the finest of standards. One who begins his work at the law with the example close before him of such men as compose your court is impressed for all time with a sense of obligation, professional and moral, to live up to those standards. Having seen so clearly the best in his profession, he will not easily be satisfied with something less for his own objectives. To serve under you all has been a great privilege and a delightful and priceless experience.

Finally let me say some things about you yourself which, being the sort of person you are, you would doubtless deny. Yet I cannot but try to express what I feel; and I am confident the jury would be on my side. I am at something of a loss for words to properly express the regard for you which has come of serving under you for this time, which I know I shall always look back upon as among the happiest and most delightful years of my life. Your example of high-minded conscientiousness and devotion to the service of your fellow-men, of kindliness and simplicity of bearing, is one which sets for a young man the course of a Christian, a gentleman and a great lawyer. I do not mean to take credit improperly to my own family; but you will know that I intend it as a compliment when I say that you have always reminded me consistently of the qualities which I remember with love and respect as having been those of my grandfather. To me you, like him, are of the tradition of the greatest judges who have sat upon your bench.

The year following his admission to the bar, on June 1, 1910 Edmund H. Lewis married Laura R. Strong of Rochester, New York and four daughters were born to them; two, however, (Mary and Catherine) died without reaching their majority, leaving only Janet Harris Lewis and Margaret Lewis to carry on the family line. Janet Harris Lewis, after graduating from Yale School of Nursing and serving in the South Pacific during World War II as a member of the Yale Unit of the United States Army Nurse Corps, took up residence in California and married Frederick W. Dickson. They had one child, Edmund Lewis Dickson, who married Maureen Marks. Children of that marriage are Laura Dickson and Barbara Dickson. Janet Harris Lewis Dickson also adopted her husband’s two children by a prior marriage, Frederick W. Dickson Jr. and Nancy Grace Dickson. Both Janet Harris Lewis Dickson and her husband are deceased.