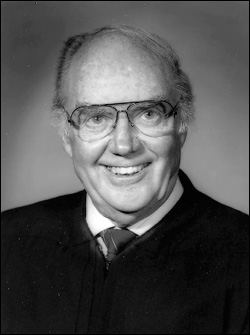 Justice John T. Casey entered LaSalle Institute in South Troy as a member of the class of 1939 and emerged as valedictorian and colonel of the regiment. He next graduated from the University of Toronto in 1943, entered the Navy as an ensign, and served in the North Atlantic, Aleutian Islands, and South Pacific. After the war he returned to Troy, graduating from Albany Law School in 1949. Six years after his graduation Justice Casey became a professor at Albany Law School, serving until 1977, teaching criminal practice and procedure. He served Rensselaer County as its District Attorney from 1956 through 1963 and as its County Judge from 1964 through 1968. In 1968, he was elected to the Supreme Court. He was appointed to the Appellate Division, Third Department, by Governor Carey in 1979. He retired from the Court at the end of 1997 at the age of 76.