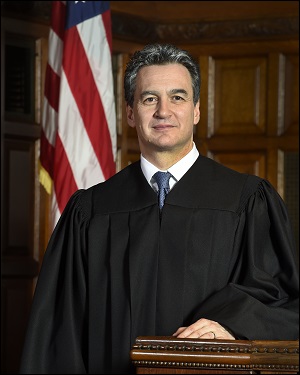 Michael J. Garcia, Associate Judge of the Court of Appeals, was born in Brooklyn, in October 1961. On January 20, 2016, Governor Andrew M. Cuomo nominated him to the Court of Appeals, and the New York State Senate confirmed his appointment on February 8, 2016. Judge Garcia received his undergraduate degree with honors from the State University of New York at Binghamton in 1983 and an M.A. degree from the College of William & Mary in 1984. In 1989, he received his law degree (summa cum laude) from Albany Law School, where he graduated as valedictorian. He began his legal career as an associate at Cahill Gordon & Reindel LLP in 1989. From 1990 to 1992, he served as Law Clerk to Hon. Judith S. Kaye, then Associate Judge of the New York Court of Appeals.

Judge Garcia is on the Board of Trustees of El Museo del Barrio. He previously was Vice President of the Americas for INTERPOL, the international police organization, from 2003 to 2006. From 2012 to 2014, he was Chair of the Investigatory Chamber of the Ethics Committee of the Federation Internationale de Football Association.

Judge Garcia lives in Westchester with his wife and three children.