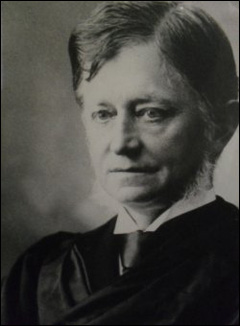 As reported in the New York Times, September 3, 1900, “To the well-earned reputation of Justice Patterson for purity, learning, sound and penetrating judgment, and that good sense which does not always go with the highest mental qualities, there must be added the reputation he has equally earned for refined and thorough scholarship and the charm of a singularly winning personality — which are not without their value on the bench.”

Edward Patterson was born in 1839 in New York City. He attended Williams and Hobart Colleges as well as Columbia Law School, receiving an LL.D. Patterson became interested in politics at a young age, identifying with and working for the Democratic party. At age 16 he began studying law in the office of Judge Edward Cowles.

In 1860 he was admitted to the bar and soon began his illustrious 26-year career of practicing law in New York City. Patterson became a candidate for judge of the Court of Common Pleas on the Democratic ticket in 1884. He lost the election by only 93 votes to fellow Democrat Judge Henry Wilder Allen. Although this was a great disappointment to Patterson, he ran again in 1885 on the Democratic ticket and lost, this time to the Tammany Hall candidate, Judge Henry W. Bookstaver.

In 1886, however, having received the combined nominations of Tammany Hall and the County Democracy , Judge Patterson was elected Justice of the Supreme Court. He was well prepared for this position, being completely familiar with the rules of law and practice. “He was intelligent, practical and ready in the disposition of business … and in his charges to juries his diction was simple, clear and forcible, and he had the gift of arraying the facts and stating the rules of law so simply as to give a jury of average intelligence a correct appreciation of the questions involved.” (Strong, Landmarks of a Lawyer’s Lifetime, Dodd, Mead and Company, New York, 1914, p. 111.) His writings were brief and to the point.

Upon his nomination for reelection to the Supreme Court at the Tammany County Convention in 1900, Justice Patterson was described by District Attorney Gardiner as being fair and having such a profound knowledge of the law that his decisions were being quoted nationwide. Gardiner also said that Justice Patterson was considered by the members of the bench and bar one of the most able jurists in New York State. Governor Theodore Roosevelt had recognized Patterson’s integrity and judicial ability and offered him a place on the bench of the Court of Appeals. Being the loyal Democrat he was, Patterson refused this honor because “it would have given the Republican Party a chance to name some up-State Justice who would draw a salary of $17,000 from the City of New York.” (New York Times, October 11, 1900.) The nomination was made, and Patterson was reelected.

Upon the death of Presiding Justice Charles H. Van Brunt and after a brief stint as Presiding Justice by Justice Morgan O’Brien, Justice Patterson was appointed to that position in 1906 and held it until his death in 1910.

Patterson was well liked and, as a judge, “had high and unusual qualities … with an unquenchable and uncompromising desire for truth and justice.” (Obituary, New York Times, January 30, 1910.) As described by Theron G. Strong in his book Landmarks of a Lawyer’s Lifetime (Dodd, Mead and Company, New York, 1914), Judge Patterson was “simple, unostentatious, democratic and friendly …” and was the same “whole-souled personality” on the bench as he was prior to ascending the bench. He was well read in both the law and general literature.

On the personal side, Justice Patterson savored life in the city, partaking in its many cultural activities. For years he enjoyed many a good billiards game at the Century Club in New York City with friends. He was an active member in many clubs, including the Century, Manhattan, Metropolitan, New York Yacht and Players.

In later years Justice Patterson suffered from an affliction which required a number of surgeries affecting the muscles of his face and his vocal chords. He rose above the debilitating condition with hopefulness, patience and courage, qualities that were greatly admired by his friends and colleagues.

On December 31, 1909, Patterson appeared at the Appellate Division to announce to his colleagues that he would be retiring because of his poor health. Soon after that, on January 28, 1910, he passed away at home at the age of 71. His five children were by his side.

As a young man, Justice Patterson took as his wife Isabel Liddon Cox, with whom he had five children. She predeceased him by approximately one year. The three sons and two daughters of that marriage include: Edward L., Dr. Henry S., Arthur Cox Patterson, Eleanor S.(Mrs. Harris R.) Childs and Mary N.(Mrs. Richard W.) Hale.