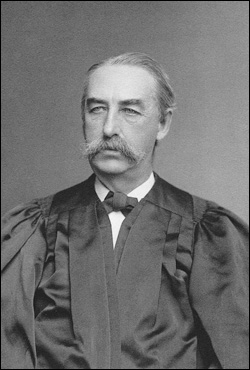 Presiding Justice Parker was born at Owego in Tioga County on August 25, 1836. His father, John M. Parker, was a member of Congress and a Justice of the New York State Supreme Court. His grandfather, John C. Parker, was also a Supreme Court Justice. Presiding Justice Parker graduated from Hobart College in 1857. At the academy, he was a classmate of John D. Rockefeller. In 1902, Hobart awarded him an honorary degree of Doctor of Laws. He read law with his father, was admitted to the Bar in 1859, and after a year of practice in Elmira, returned to Owego. In 1867, he was appointed United States Commissioner for the Northern District of New York and in the same year was elected a member of the New York State Constitutional Convention. In 1871, 1879, and 1880, he was president of the village of Owego. He was elected County and Surrogate Judge of Tioga County in 1883 on the Republican ticket and served as such until 1887 when he was elected Justice of the Supreme Court. He was appointed Presiding Justice of the Appellate Division, Third Department, by Governor Levi P. Morton in October 1895 and served as such until he retired by the age limit on January 1, 1907. He had been reelected a Supreme Court Justice in November 1901. Presiding Justice Parker’s wife was the daughter of former judge of Tioga County Thomas Farrington, who is also listed as a former New York State Treasurer and former New York State Attorney-General. Presiding Justice Parker died March 2, 1909, at his home in Owego. Presiding Justice Parker was said to be quite eccentric in manner. He had great scorn for fashion and modish clothing, and it took considerable urging on the part of his colleagues on the bench to induce him to wear the robe of a Justice. While occupied by legal problems he relieved his mind by dime novels of the “Nick Carter” type, having a standing order with a newsdealer to supply him with these stories as fast as they were published. He was very interested in scientific agriculture and until shortly before his death he owned and operated a large farm near Owego.