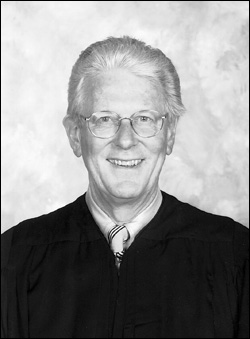 Justice D. Bruce Crew III is a graduate of Colgate University (1959) and Albany Law School (1962). After 11 years in private practice in Elmira, he served as Chemung County District Attorney from 1973 to 1983. He was elected to the Supreme Court in 1982 and re-elected in l996. In 1987, he was appointed Administrative Judge for the Sixth Judicial District. Justice Crew was designated a Justice of the Third Department effective January 1, 1991. Justice Crew has lectured as an adjunct professor of law at Elmira College and has also lectured at Corning Community College and other venues. He is the author of the publication “Criminal Discovery in New York State — Selected Issues,” currently in its ninth edition. He served on the Court of Appeals in 1994 by designation. He retired from the bench in 2007.