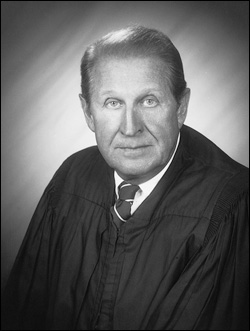 Justice Yesawich also sat on the bench of the 3rd Department; more information can be found HERE.

Paul J. Yesawich, Jr. was born on November 27, 1923, in New York City. During World War II he served as a Naval officer in the Pacific. He graduated from Niagara University with a B.A. in 1948 and an M.A. in 1950 and received his law degree from Cornell Law School in 1951, the same year he was admitted to the Bar. He went into private practice in New York City and from 1952 to 1953 served as Assistant Counsel to the subcommittee of the Ways and Means Committee of the U.S. House of Representatives investigating administration of Internal Revenue laws.

In 1955, Yesawich and his family moved to Cortland, NY, where he became partner in the firm of Folmer, Ryan, Fenstermacher & Yesawich. During that time he served as a Commissioner of the New York State Law Revision Commission (1961-1970). In January of 1971, he was appointed to the Supreme Court, 6th Judicial District, by Governor Nelson Rockefeller. Later that year, Yesawich was elected to a full 14-year term. He was designated to the Appellate Division, First Department in 1974 and remained there for seven years, serving as a trial judge in the Sixth Judicial District in Cortland simultaneously. During that time, he also served as a member of the Advisory Panel on the Proposed Code of Evidence for the State of New York. In January of 1981, he was designated to the Appellate Division, Third Department, where he remained until his retirement in 1999. He served temporarily as an Associate Judge of the Court of Appeals during its March 1992 session.

One of the most memorable decisions Justice Yesawich made was when the state Legislature raided pension funds of state employees. In that decision, he said the Legislature did not have the authority to take such action.

In February of 2000, Chief Judge Judith S. Kaye named the newly retired Justice Yesawich to the Commission on Fiduciary Appointments, a high-level panel to examine the fiduciary assignment process statewide and make recommendations for reform.

Justice Yesawich married Elizabeth Larkin Yesawich in 1948. They are the parents of three grown children. He and his wife reside in Homer, New York.

Daniel C. Brennan, The History and Justices of the Appellate Division, Third Department, 1896 to the Present, p. 49, available at: www.nycourts.gov/ad3/History.pdf