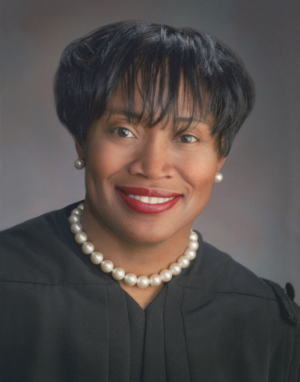 Shirley Troutman, Associate Judge of the Court of Appeals, was born in Fort Valley, Georgia. She was raised in Buffalo, New York, where she attended public schools. In 1982 she received a Bachelor of Arts in Business Administration from the State University of New York at Buffalo. She received her law degree from Albany Law School in 1985 and was admitted to the New York State Bar in 1986.

In 1994, Judge Troutman was appointed by Mayor Anthony Masiello to serve as a judge for the Buffalo City Court, and she was elected to a full ten-year term the same year. In 2002 she was elected to the Erie County Court, where she served until her election to New York State Supreme Court in 2009. In 2016 she was designated by Governor Andrew Cuomo to serve on the Appellate Division, Fourth Department.

In November of 2021, Judge Troutman was nominated by Governor Kathy Hochul to serve on the New York State Court of Appeals. She has served as co-chair of the Franklin H. Williams Judicial Commission, National Association of Women Judges New York Chapter President, a member of the Advisory Committee on Judicial Ethics, and member of the Ethics Commission of New York State Unified Court System. She has also been an active member of many bar associations.