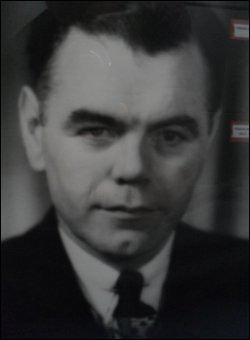 Prior to his career in the law, Myles J. Lane, a standout athlete at Dartmouth, played football, baseball and hockey “with such accomplished versatility during his college days in the 1920’s that he was widely compared to Jim Thorpe and Hobey Baker as the ultimate all-round athlete.” (Sports World Specials: No Deal, New York Times, August 17, 1987, p. C2.) He has earned a place in the American College Hall of Fame and was inducted into the National Football Hall of Fame in 1970, the U.S. Hockey Hall of Fame in 1972, and the Madison Square Garden Hall of Fame in 1984.

Myles J. Lane was born in Melrose, Massachusetts, on October 2, 1903. He attended Melrose High School, where he was an outstanding athlete. While attending Dartmouth College in Hanover, New Hampshire, he was an all-America hockey and football player, having won three varsity letters in football, three in hockey and one in baseball. He was captain of the 1927-28 hockey team and played on the 1925 football team that won the national championship. Upon graduation from Dartmouth in 1928, Lane entered professional hockey. He played with the New York Rangers for a short time before signing with the Boston Bruins. He was a member of the Bruins when they won the Stanley Cup in 1929, becoming the first American to play for a Stanley Cup champion. He remained with them until 1932.

Following his hockey career, Lane became head varsity football coach at Boston University from 1932 to 1933. He then became backfield coach at Harvard University. In addition to his coaching duties, he attended law school and graduated from Boston College Law School in 1934.
Upon graduation he joined the firm of O’Connor & Farber. Three years later he was appointed an Assistant United States Attorney for the Southern District of New York.

In 1942, Lane entered the U.S. Navy as a lieutenant, and was a commander when he returned to civilian life in 1946. He rejoined the U.S. Attorney’s office, becoming Chief Assistant. In 1951 he was appointed United States Attorney, a position he held until 1953, at which time he returned to private law practice. Lane prosecuted Communist spies and Mafia racketeers in a number of high-profile cases, including the 13 secondary Communist party leaders; the atom spies, Julius and Ethel Rosenberg; and reputed underworld king pin, Frank Costello.

During the 1950s and 1960s, Lane served on several citizens’ committees, including the Committee on Public Employee Security Procedures in 1956. Two years later, Governor Harriman appointed him to the State Investigation Commission. Lane was chairman
on a rotating basis and later became the Commission’s permanent chairman. This Commission was charged with investigating such issues as underworld activities, narcotics problems and school building flaws.

Justice Lane was married to Margaret McCandliss Lane. They had no children. He died of Alzheimer’s disease on August 6, 1987, at age 84.